Many Killed, Houses Burnt as Soldiers, Youths Clash In Imo 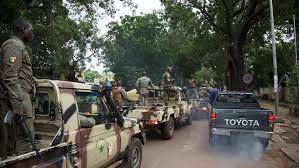 No fewer than 10 persons were feared dead, Friday, as soldiers clashed with youths of Umuokwu Izombe community in Oguta Local Government Area of Imo State.

About 12 houses including the palace of the traditional ruler of the community, Eze Pius Muforo were reportedly burnt and 15 others destroyed.

One Catherine Okebata and C. A. Onyeukwu were said to be among those whose houses were reportedly burnt.

It was gathered that trouble started when soldiers in the area had a misunderstanding with some youths of the community over crude oil bunkering activities.

Bunkering activities are said to be on the increase in Izombe Eziorsu and Osobodo lately.

According to a source in the area, soldiers at the heat of the misunderstanding allegedly shot and killed a youth of community whose name was given as Chukwunonso Iherue.

Angered by the incident, the youths were said to have mobilized and attacked the soldiers, resulting in the alleged killing of two soldiers and burning of vehicles.

The soldiers, it was gathered reinforced and stormed the community in a reprisal attack and allegedly burnt houses

“The entire community is sacked, many people have been killed, many houses burnt, the situation is very terrible.

“Government should please intervene in the situation and save our lives”, the source cried out.

The Public Relations Officer of the Army in the state, Babatunde Zubairu could not be reached as at press time.

Imo State has been rocked by violent attacks in the past months, with many killed and security formations attacked.

The violent attacks had been worst in the Orlu area of the state.