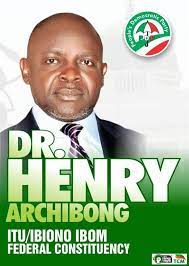 Dr. Archibong who has advocated for deliberate cultivation of high-ranking members in the National Assembly explained that Akwa Ibom State is losing so much due to the continued election of greenhorns in the politics of the National Assembly into the Green and Red Chambers from the state.

The Lawmaker made the submission during an interactive session with members of Uyo Senatorial District Media Practitioners Forum, USDMPF, at his hometown, Mbak Obio Itam over the weekend.

He explained that some States in the North, South West, East and even South South had since taken   advantage of having ranking members who have served more than a- fifth term in the National Assembly and therefore hold both the knife and the yam of control and influence.

The Representative tasked the people of Akwa Ibom State to make conscious efforts to return members and Senators again and again so they can be positioned to control the Levers of power and influence to attract life – touching projects and occupy strategic leadership positions.

He also called for the establishment of a Federal College of Agriculture in the state to help in the education of the people in all facets of modern agricultural practices, including value chain addition and research adding that the Federal Colleges of Agriculture around the region are too far away from Akwa Ibom State.

On the reconstruction of Calabar- Itu highway, Dr. Archibong asserted that he has kept the issue on the national discourse, revealing that members of the Akwa Ibom caucus in the National Assembly had been involved in a lot of resolutions made concerning the project.

He said the USDMPF Roundtable is an initiative to engage stakeholders to chart a way forward for identifying a credible successor for Governor Emmanuel from Uyo.

Senatorial district come 2023 and will work to inform and educate the people on government policies and programmes.

Prince Emmanuel Ndon, Publisher, Dailynews Newspaper and the Vice Chairman of the Forum, Director of New Media, Mr. Utitofon Morgan, the Publicity Secretary, Pastor Michael Joseph and the Financial Secretary, Mr. E. B.  Ekeng among others.