In Osun, Commerce is Life By Abiodun Komolafe 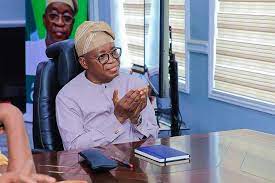 Since time immemorial, Commerce has been seen as the mirror that depicts the economic reality of a given people. The buoyancy or otherwise of the economy of a given people, which is called Commerce, is certainly indicative of an improvement or otherwise of the mentioned economy. We may start saying stuffs that are oftentimes off the curve, but, if there are no tangible economic indices on ground, then, that economy has not grown.

A regular visitor to Osun State in recent times will find out that the level of economic activities has increased in every nook and cranny of the state. From Osogbo to Ila-Orangun; from Ile-Ife to Ijebu-Jesa; and, from Ejigbo – Ile-Ogbo, magnificent fashion boutiques and allied retail outlets are springing up with each passing day, thereby increasing the volume of economic activities; and that means improved living standards for the average residents of the state. Well, the reason is not so surprising! It is simply because the Gboyega Oyetola-led administration got that aspect of good governance right.

Not long ago, the spiral hike in the prices of goods and commodities attracted the attention of the governor. And he responded to it through the interlink of the Iyalojas, Babalojas and other stakeholders affected by the effects of the soaring prices of goods and commodities in the state. Yes, that hike was not Oyetola’s making. It was the fault of the national economy. But then, the governor responded promptly, understandingly, and positively by calling the stakeholders to a roundtable where he showed his concerns and agreed on what to do to ameliorate the hardship.

‘Ti ebi ba ti kuro ninu ise, ise buse’ (If we remove hunger from poverty, poverty vanishes). Discreet investigations have shown Oyetola as a leader who has a holistic overview of what the society should look like: people must find something to do – engage in one legitimate economic endeavour or the other – in order to feed with dignity. So, one can safely say that increasing Commerce for the purpose of reducing unemployment as well as empowering the people is deliberate. Ensuring that Commerce sustains the economy is deliberate! By refusing to borrow, or concede to mortgaging the future of Osun citizens is deliberate! Ensuring that civil servants and pensioners get their salaries and allowances promptly is deliberate! Most importantly, not being frivolous with the state’s meagre resources is also deliberate!

Thankfully, therefore, that, in a world, where a long tapestry of fabrications, dubious suppositions and evident parody are providing props and backdrops for power, Oyetola, aka, ‘Ileri Oluwa’, has provided the electorate with a perfect mirror of their hope. In our part of the Global Village that is grossly immersed in self-expression of frustration, the governor has promised to work “towards introducing soft, interest-free loans for traders in order to boost their businesses.” In a turf where politicians use ‘the masses’ to mobilize for elections but don’t consider ‘the masses’ when governing, the astute manager has shown himself as a caring and listening governor; one who realizes that the price of pepper has gone up and decided to meet those concerned in the chain with a view to seeing what could be done to mitigate the sufferings of the people. Needless to repeat therefore that the inauguration of a Fruit Juice Factory in Abere; the Ethanol Bio-Refinery Factory in Iragbiji; and the resuscitation of Ergo Carbonated Drinks/Yoghurt Plant in Ido-Osun were some of such deliberate interventions by the Oyetola-led government.

From available records, Oyetola has even done a lot more! For instance, a total of 1,094 Cooperative Societies were registered within the last 3 years while about 840 Societies were revalidated. Talks are also said to be ongoing with quite a number of foreign and local investors who are desirous of establishing their companies in Osun. The development, modernization and relocation of markets, where necessary, the remapping and reengineering of the Omoluabi Free Trade Zone, and the establishment of ‘Adire Osun’ Market (in collaboration with the Ministry of Culture and Tourism) are also credited to Oyetola’s foresightedness.

As a Post Covid-19 Intervention Strategy, it is a matter of public knowledge that government embarked on the provision of Entrepreneurial Development and Skills Upgrading Training for 2,236 people with a view to generating 15,000 direct and indirect jobs in the State, annually. One-off payment of N50,000.00 – N100,000.00 per participant was also made to beneficiaries. Through Osun Microcredit Agency, this Administration has empowered at least 5,296 beneficiaries with N2,225,686,000.00 across the 30 Local Government Areas (LGAs), and the Area Office in the State. The Agency has also empowered 311 youths with N91,140,000.00, disbursed to different categories of informal sectors.

As if these were not enough, the State government was said to have directly disbursed, or facilitated, or jointly financed with the Federal Government on various financial intervention/empowerment programmes to over-18,000 Nigerians. Notable among these interventions were: CAC Registration Support: 6,606; NIRSAL Loan: 1,145; BOI: ​ 827; NSME Survival Fund: 2,399; Online Payroll Support Programme: ​ 3,812; Survival Fund (Transport): ​4,850; and AGSMEIS Loan: 251. Government also allocated 15,000 Hectares (5 Hectares per Senatorial District in process for Hybrid Cocoa plantations, under its Non-Oil Export Drive. In collaboration with NEPC, about 6,606 youths were documented as beneficiaries under the Youth Export Development Programme (YEXDEP). This is apart from the facilitation of the production of over-250 exportable ‘Proudly Osun’ products.

Think of the International Trade Centre and Dry Port at Dagbolu and think of how far Oyetola has gone in the transformation of industrial and commercial activities in Osun. The belief is that, when completed, this economic hub will provide not less than 30,000 direct and indirect employment opportunities for the people.  The opening of new frontiers for external exposure on Osun e-Commerce/Digital Economy platform, and the success story of Osun Food Support and related schemes, aimed at ensuring food security in the state are also products of Oyetola’s positive disposition towards the people’s welfare. Was it any wonder therefore that BudgIT recently ranked Osun State 8th in the Fiscal Responsibility Performance Index, ahead of all states in the Southwest Nigeria, with the exception of Lagos.? Is it any wonder, too, that ‘the Land of Virtue’ ranks 2nd – behind Ondo State – in the ‘Ease of Doing Business’ in the Southwest?

All said, more can still be achieved, especially, if the Small-, Medium-, and Micro- traders can form themselves into cooperatives so that it can become easier for the government to help them. For a fact, it is always good when groups of artisans can come together as cooperatives, and are registered. Truth be told, starting a business is an uphill task for many people. To simplify the process, government can be of immense assistance, especially, in the regulation of the entry points of goods and commodities, not just for the regulation of the prices but also for the modification of the flow of goods.

May the Lamb of God, who takes away the sin of the world, make Gboyega Oyetola’s Administration the best in the history of Osun State!