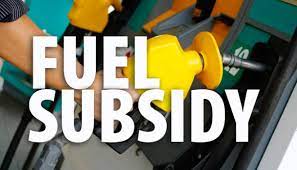 Despite the signing of the Petroleum Industry Act in September 2021, otherwise a signal of the intention to deregulate the country’s oil industry, including the import, refining and selling of premium motor spirit (PMS), colloquially known as petrol and the many announcements by officials of the Buhari government to remove the fuel subsidy, the subsidy remains firmly in place.

With global oil prices rising, the real cost of petroleum in Nigeria could rise to N302 while the government maintains the price at N162. (Nigeria imports about 90% of the petrol it consumes). An industry watcher, Seun Smith, maintains that the Buhari government is unlikely to remove the fuel subsidy. This is despite the N170 billion per month price tag.

With debt service taking up 98% of the federal government’s revenue in the first five months of 2021 and the FGN planning to borrow N5.62 trillion to plug 2022 fiscal deficit, the fuel subsidy has become a noose around Nigeria’s neck. It must go the very next morning after President Buhari leaves office.

Nigerian governments have for more than two decades bungled attempts to remove the fuel subsidy; their efforts have been as incoherent and incompetent as the Nigerian state itself. Here are a six lessons from Nigeria’s failed attempts and from five successful case studies of subsidy reform elsewhere reviewed here:

4. Clear Leadership, Clear Plan: There are many examples of successful strategies to reform fuel subsidy and development agencies have written tons of analysis on them. The Goodluck Jonathan administration seemed not to have read a page from the primers when it attempted to remove the fuel subsidy in 2012 despite its finance ministry being led by a former Vice President of the World Bank, Ngozi Okonjo-Iweala. It suddenly announced the subsidy removal while Dr. Okonjo-Iweala was still on Christmas holiday in the United States of America. The execution showed there was really no plan and no one was really in charge.

6. Don’t offer Pies in the Sky: Moreover, fuel subsidy reform communications are often based on communicating often pre-delivered benefits such as cash transfers rather than pie in the sky goodies that the government would spend the money saved from eradicating the subsidy on. Designing palliatives and planning how they could be rolled out is 80% of the communications to strategically manage public opposition to fuel subsidy reform.

With editing by Gbemi Abiola