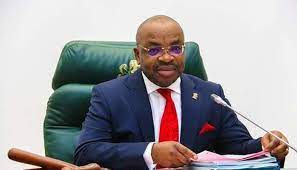 He said this during the Maiden Edition of the Roundtable discussion with members of the Uyo Senatorial District Media Practitioners Forum (USDMPF) in his residence in Itu.

Archibong who observed that Governor Emmanuel had always leaned on God for direction, assured that the State leader would never give a wrong direction. He therefore urged members of the State to pray “that God gives him the power to give a good direction for us to follow. Giving direction is different from deciding for the people. A good leader’s direction is followed naturally.”

“If the Governor is there at that vantage position, he knows who can best consolidate on his achievements. We don’t want an experience where we think of someone as being competent only to be disappointed in the end. The economy is going to get bad. So, we need a resourceful person. And someone who is a manager of resources with a triple A rating in the mangement of economy should be able to know what kind of Governor we need at this time”, the lawmaker stressed.

While appraising the Governor’s sterling achievements in 6 years, Archibong extolled the State’s Chief Executive for ensuring the prompt payment of salaries and for creating a safe and secure society.

” This state does not owe salaries. When a person works and gets his salary, no matter how small, he lives long and lives for his family and can plan.

Secondly, Akwa Ibom is the destination of choice for every activity of the Federal government because of it’s safety. It is the second state with the highest volume of Foreign Direct Investment (FDI) next to Lagos because it is safe for investors to come in”, he noted.

Attributing these feats to the Governor’s ingenuity and integrity, Henry Archibong applauded the infrastructural strides of Governor Emmanuel and relished their benefits.

“The Governor is not a typical politician that dribbles, disrespects people or is wasteful. He has the reach and connection and has enabled the employment of our youths into relevant industries”.

The Lawmaker who commended the State Governor for completing the projects left unfinished by the previous administration, submitted that such was necessary for continuity and maintenance of democracy.

“He came in and ensured that he completed all unfinished projects of the previous administration. So whether people say he did not start it or not, it does not matter because government is a continuum”.

Also mentioning the Dakaada Tower, the smartest building in West Africa, Rt. Hon. Archibong told the Media body that multinationals outside the state will have no excuse not to relocate to the State.

The Federal Lawmaker who appealed to people of the state to be united in purpose with the Governor said that all of Governor Emmanuel’s plans were targeted at bettering the lot of the entire populace and not a figment of his personal interests.

He pledged to continue to represent his constituency well with more life touching bills, motions, empowerment programmes. He said by next week, he will be championing the establishment of a new Federal Agricultural Tertiary Institution For Akwa Ibom State through a bill.