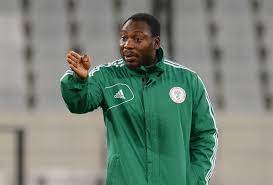 Amokachi and Akide are among a group of seven people that also included ex-Arsenal manager Arsene Wenger added to the panel.

Wenger’s appointment is in addition to his role as FIFA’s head of global football development.

IFAB, who are responsible for the laws of the football game, took to their Twitter account to announce their new members, saying the new members will be introduced officially in the next few days.

Over the next few days, all new members will be presented in detail.

Amokachi is a former Nigerian international that won two 44 caps and played at two World Cups. He was part of Nigeria’s golden generation that won the Africa Cup of Nations in 1994 and the gold medal of the men’s football event of the Atlanta 1996 Olympics.

The former Everton star scored in the 3-2 win over Argentina, while he also holds the distinct honour of scoring the first goal in the UEFA Champions League.

Meanwhile, Mercy Akide is a former Super Falcons star- the Women’s national team of Nigeria. She is the first recipient of the African Women footballer of the year.