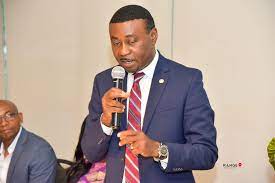 Ahead of the November 6 governorship election in Anambra State, Washington DC-based Author, Okey Mbonu has called on people of the state to be wary of the antics of persons without the interest of the state at heart, even as he urged them to rise to resist acts of brigandage and tyranny.

In the statement released by his Senior Media Adviser, Charles Adeyinka and made available to Atlantic Reporters, Mbonu warned of grave consequences, if the wish of the people is perverted.

“The leadership of the Nigerian Diaspora in the US, of which I belong, has steadily observed the unfolding drama, surrounding the upcoming Anambra Governorship Election, populated by some substantially qualified candidates, and also some mediocre candidates, the later of who may be planning to visit mayhem on the state.”

“Anambra state is perhaps the most important state in Southeastern Nigeria, given the state’s deep pedigree, as the ancestral root of the Igbo nation, a state that has produced some of the most remarkable individuals in Nigeria, and modern African History; ranging from Nnamdi Azikiwe, to Chinua Achebe, and other notable persons of global excellence, with solid achievements in the Arts, Literature, Public Service, and Science.  Thus, Anambra voters should not allow themselves to be cowed by later-day brigands, or desperate-thugs, some with dubious wealth, whose clandestine plot may be to hijack the state through subterfuge.”

“Anambra state should rightly be the last stand of the Southeast region of Nigeria, and therefore is a state that is expected to withstand attempts by unscrupulous figures, who may want to replicate the experiment from a nearby Southeast State, in a state that considers itself “The Light of The Nation.”

“On behalf of several Diaspora stakeholders with roots in Anambra, we stand ready to meticulously document incidences of any brigandage, compromise of election officials, and improper use of thugs, law enforcement, and military personnel, which could thwart the will of the people, and voters of Anambra, in this election.  We stand ready to bring any would be perpetrators to book, nationally, and internationally.”

“Finally, any arrangement that contravenes the will of the people in this election, will be challenged vigorously, by all stakeholders of the state, both within and outside the state, and outside Nigeria.  Anything less than a free and fair poll in this election, will surely attract serious resistance from all stakeholders of Anambra, at home or in the Diaspora; and will most likely result in infamy for the perpetrators.”