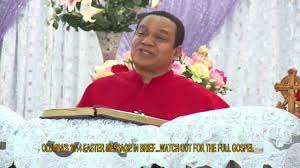 Leader of Brotherhood of the Cross and Star, His Holiness Olumba Olumba Obu, has again called on Nigerian authorities to return to the 12 states structure she operated in the 1970s.

He said this is one way of solving the endless calls for restructuring of the country as well as the agitations from some parts of the country seeking self-determination.

In a message he sent through Christ Ambassador John Ezeoke, who led a delegation to visit Assistant Inspector General of Police of Zone Six, Usman Sule Gomna, the respected spiritual leader also advised that the country should also return to the use of the former National Anthem.

He maintained that once the country has returned to these two, a lot of socioeconomic and sociopolitical crises bedeviling the country will abate considerably.

“Our leader has asked us to reiterate his earlier advice that Nigeria should return to the use of the old National Anthem.

“Nigeria should also return to the 12 states structure. That structure was spiritually significant and approved by God.

“Nigeria is a country much loved by God. In fact, it is God’s own country. There is no power that can divide the country. The agitations for Biafra, Oduduwa or Middle Belt nations will all fail. They are not in God’s Agenda. 12 states structure is what will eventually come to be in Nigeria because his words have never failed”, Ezeoke stressed.

He said that the wordings in the old anthem were divine, potent and very meaningful.

According to him, “Didn’t we see how things were in the country when the anthem was used?”

The commissioner of police in the state, Alhassan Aminu who was also visited with the same message, called on Nigerians to always chant the prayer as contained in the country’s former national anthem.