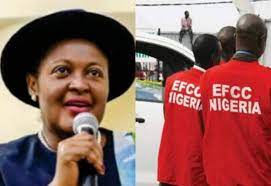 Head, Media and Publicity at the Economic and Financial Crimes Commission, Wilson Uwujaren says the anti-graft agency has no hand in the reported raid on the Abuja residence of Supreme Court justice, Mary Odili.

In a statement signed by the EFCC spokesman and made available to newsmen, Friday evening, the Commission distanced itself from the alleged raid on the residence of Justice Odili, stating that “If there was any such operation as claimed by the media, it was not carried out by the EFCC”.

The statement, titled “EFCC Did Not Carry Out Any Operation in Justice Odili’s Home” reads in part:

“The attention of the Economic and Financial Crimes Commission, EFCC, has been drawn to claims in a section of the media that operatives of the Commission today, October 29, 2021 stormed the Maitama, Abuja home of a Judge of the Supreme Court, Justice Mary Odili, purportedly to execute a search.”

“The Commission by this statement wishes to inform the public that the report is false as it did not carry out any operation at the home of Justice Odili.”

“If there was any such operation as claimed by the media, it was not carried out by the EFCC. The Commission enjoins the public to discountenance the report.”

It would be recalled that armed men suspected to be operatives of the Economic and Financial Crimes Commission Friday evening, visited the residence of Supreme Court Justice Mary Odili.

Justice Odili is said to have resisted the attempts to raid her residence by the operatives, saying she had no business with them.

Heavily armed police officers were also amongst the over 50 operatives said to be part of the operation.

Earlier this week, a federal judge ordered the immediate return of his international passport, saying anti-graft prosecutors have failed to substantiate grounds for continuous seizure of the politician’s passport.