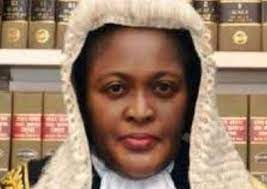 A Chief Magistrates’ Court has revoked a search warrant granted to the Joint Panel Recovery unit of the Federal Ministry of Justice to search the home of Supreme Court Justice Mary Odili.

The panel, which comprises the Economic and Financial Crimes Commission, the Nigeria Police Force and the Ministry of Justice, had obtained a search warrant from the magistrates’ court after a whistleblower, Aliyu Umar, claimed to have observed illegal activities going on at No. 9, Imo Street, Maitama, Abuja.

Umar’s affidavit dated October 13, 2021, read in part, “I have observed some illegal activities going on in those houses within Abuja are illegal and hereby report the said matter to the law enforcement agency.

“I hereby state that all information provided by me to the EFCC is true and correct to the best of my knowledge.”

In a second affidavit deposed to by a senior police officer, CSP Lawrence Ajodo, the panel applied to the chief magistrate in Abuja seeking a search warrant to search the house.

Armed with the search warrant, the police and other members of the panel stormed the house which turned out to be the home of Supreme Court Justice Mary Odili, who is also the wife of former Governor Peter Odili of Rivers State.

She was said to have resisted the attempts by the policemen to search her house, insisting that the house belonged to her and not her husband.

A top source said, “EFCC operatives armed with a search warrant stormed Justice Odili’s home today, claiming to be investigating her husband. Justice Odili insisted that it was her personal house and not her husband’s.

“As I speak to you, the operatives are still there, insisting that they must search the house.”

But the EFCC Spokesman, Mr Wilson Uwujaren, said, in a statement, that the commission had no hand in the matter and advised members of the public to disregard any news to the contrary.

The statement read in part, “The attention the EFCC has been drawn to claims in a section of the media that operatives of the commission today, October 29, 2021 stormed the Maitama, Abuja home of a Judge of the Supreme Court, Justice Mary Odili, purportedly to execute a search.

“The commission, by this statement, wishes to inform the public that the report is false as it did not carry out any operation at the home of Justice Odili. If there was any such operation as claimed by the media, it was not carried out by the EFCC. The commission enjoins the public to discountenance the report.”

Amid the controversy, however, the chief magistrate issued an order on Friday night accusing the government of misleading the court.

The order read, “Upon misrepresentation to this honourable court that led to the issuance of a search warrant in favour of Joint Panel Recovery, Ministry of Justice, against House 9, Imo Street, Maitama, Abuja, dated October 29, 2021. In view of the above fact, the said search warrant is hereby revoked.”

Peter Odili, who was governor from 1999 to 2007, obtained a perpetual injunction from the Federal High Court in 2007 which barred the EFCC from investigating or prosecuting him.

In 2020, he again approached the Federal High Court to get another injunction to stop an impending probe. Last month, the former governor sued the Nigeria Immigration Service for seizing his passport at the airport.

See also  FBI, Hushpuppi and Abba Kyari: What If…?

In its response, however, the NIS said it was the EFCC that asked it to seize Odili’s passport as part of a probe.

Justice Inyang Ekwo, however, ordered Immigration to release the passport to Odili immediately.