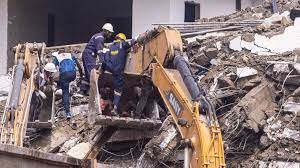 •Help Rescue My 18-Yr-Old Son, Father Cries Out To Gov

AS a fallout of the collapsed 21-storey building in Ikoyi, the Lagos State Government has requested for the list of all buildings above five floors under construction in the metropolis.

The governor made this demand during his visit to the scene of the collapsed structure at Gerrard Road, Ikoyi on Wednesday, saying there would be a comprehensive review of all the buildings above five floors under construction in order to sanitise the built environment in the state.

He said: “There will be a comprehensive review. I have asked the Ministry of Physical Planning to give me a detailed list of all buildings that are five floors and above that are under construction in Lagos. I asked for that list last night (Tuesday) and I hope they will give it to me later today (Wednesday).

“This is going to be due diligence that we are going to conduct with the private sector. We are probably going to work with a lot of professional institutes so that we can quickly go round and see if we can do integrity tests and non-destructive tests on the buildings.”

Sanwo-Olu also hinted that he had set up a high-powered Commission of Enquiry, composed of members from outside of government to investigate the cause of the collapsed building and submit the report in 30 days.

The governor mentioned the current President of the Nigerian Institute of Town Planners (NITP), Mr Olutoyin Ayinde, who is a former Commissioner for Physical Planning in the state, as chairman of the panel.

Other members of the panel, the governor said, include Dr Akintile Idris Adeleke, foremost structural engineer; Yinka Ogundairo, an astute architect; Geofrey O. Geofrey, a chartered builder; Mrs Bunmi Ibrahim, a lawyer and property player and Ekundayo Onajobi, a lawyer, as secretary of the panel. The governor also listed the names of survivors who have been rescued so far from the rubble. The names are Oduntan Timilehin (26), Ahmed Kenleku (19), Sunday Monday (21), Adeniran Mayowa (37), Solagbade Nuruden (33) and Waliu Lateef (22). He stated that three others survivors have been discharged, adding that the six persons named were still under care at the General Hospital, Lagos.

“Three others have been discharged from the hospital. So, we have all their names, their telephone numbers, their pictures, and everything.

“Unfortunately, we have 21 confirmed mortality – meaning people who have been taken out from this site and taken to the morgue,” Sanwo-Olu added.

Sanwo-Olu described the incident as “a clear national disaster,” adding that “it is an event that one can say that, indeed, mistakes were made from all angles, and this is an event that should not be happening in a modern day city like Lagos.”

He thanked the first responders and gallant men who have been engaged in the rescue operation in the last two day, promising members of the public that everything would be done to get to the root cause of the collapse.

“I actually travelled out of Nigeria early in the morning on Sunday. I travelled to Rome to attend the G20 Summit. There is a side conference by European formations for Africa and I was invited to speak on engagements throughout Sunday night.

“I was on the rostrum speaking on Monday when I got a call of what had happened in Lagos; I was to travel to COP 26 but I had to return,” he explained.

He said he had ordered the indefinite suspension of the General Manager of the Lagos State Building Control Agency (LASBCA), Mr Gbolahan Oki, with immediate effect, while indicating that others officials involved would be fish out during the course of further investigation.

He explained to families of victims that rescue operations were not stopped as rumoured, but that the entire machine was stopped at a time to sound-check if there was any noise or voice in the rubble for quick intervention.

Godwin, father of missing 18-year-old victim, cries out to gov

Father of one of the victims of the collapsed building, Mr Abel Godwin, has appealed to Governor Sanwo-Olu to do everything possible to rescue his child.

He claimed to have travelled from Abuja to Lagos because his 18-year-old son was involved in the incident.

According to him, he heard of the accident on Tuesday and arrived in Lagos at 2:00 a.m. on Wednesday.

He said he was directed to the Mainland Hospital, Yaba, formerly Infectious Disease Hospital, to identify his son.

“I have been directed to go to IDHA. I went there but they didn’t allow me to enter.”

Godwin also stated that he had filled a form with his son’s information.

Governor Sanwo-Olu asked him to remain patient, adding that he would be reached if there’s any update tomorrow (Thursday). “We have your telephone number and everything. By tomorrow (Thursday) at the latest, once we conduct the autopsy, they will be invited to the morgue to identify the various corpses that we have,” the governor said.

Meanwhile, more details have emerged on how a United Kingdom-based man and other intending occupants of the collapsed building were involved in the incident.

Nigerian Tribune gathered that the incident occurred few hours after more workers were drafted to the site for faster pace of the work.

It was gathered that the UK-based man, simply identified as Samuel, was said to be on his way out of the building when it collapsed.

The building reportedly caved in when buyers were on an inspection tour of the facility.

An unidentified family member of the UK-based man was seen around the scene of the incident with the hope that he would be rescued. He was heard telling other people that: “He came here on Monday with two of his sisters and a friend to inspect the project.”

The man also added that “he had almost completed the payment for his apartment. He was only here to see the level of development. He was expecting to move into the place next year.

“They were on their way out of the building when somebody called him to come back. He went back with his friend and the building collapsed before they could come out.”

He, however, expressed concern, saying: “We don’t know where he is now. We don’t know if he has been rescued or not. We don’t have the identities of the survivors and the dead bodies.”

Nigerian Tribune, however, gathered that the missing Samuel was not the only intending occupant involved in the incident, as some of his neighbours-to-be were also affected.

Some other buyers who had paid for the apartment, either in part or in full, were also reportedly on an inspection tour when the building collapsed.

It was also gathered that more construction workers were on the day of the incident added to those who had earlier been working on the building.

RCCG pastor, 22 others yet to be accounted for, says friend

In another development, pastor of a Redeemed Christian Church of God (RCCG), Ola Ogunfuwa, an engineer and 22 of his workers who were trapped in the collapsed building are yet to be accounted for, a concerned resident and friend of the cleric, Mr Omotosho Shola Emmanuel, has raised the alarm.

Emmanuel stated this at the scene of the collapse when he visited, just as he explained that Ogunfuwa was in charge of the Living Water Parish in Ibafo, Ogun State.

According to him, Ogunfuwa and 22 of his workers were working in the site as of the time of the incident and have not been found nor identified among those rescued.

The 22 other artisans were mainly bricklayers and welders who came from Ibafo to work in Ikoyi.

Most of the relatives of the trapped people said they had been denied access to identify their loved ones from the 21 bodies recovered so far by government officials in charge of the morgue where their bodies were taken to.

The Lagos State House of Assembly has moved to summon some government officials over the collapse of a multi-storey building in Ikoyi.

This followed a visit to the site by a team of lawmakers, led by the chairman, House Committee on Physical Planning and Urban Development, Honourable Nureni Akinsanya.

The lawmaker noted that the team was at the site on the instruction of the Speaker, Honourable Mudashiru Obasa, adding that the delegation would present a report on its findings to the House and those concerned could be invited.

Akinsanya sympathised with families of victims, just as he commended the rescue efforts being carried out by agencies of the state government in collaboration with security agencies and private partners.

“I am sure the leadership of the House, led by the Speaker, Honourable Mudashiru Obasa, will set up a committee or panel to look into the report, invite those to be invited and if we have to amend our laws, we will.

“We have been on the ground for hours and we have seen what has happened. When we get back, we will write our report.

“Mr Governor has also spoken and given an update. On our part, the House will carry out its own functions,” he said.