Between Imo APC And PDP 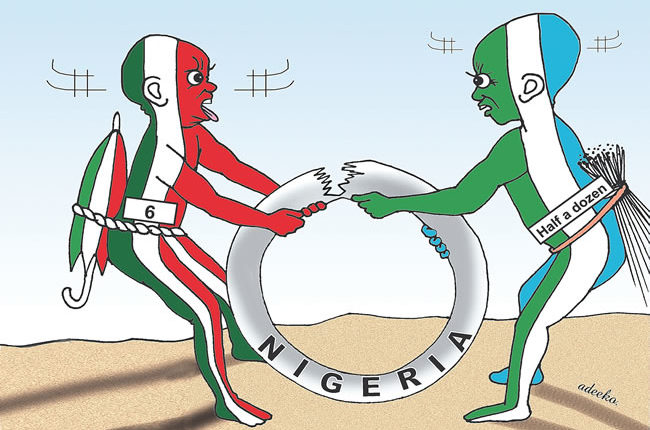 The All Progressive Congress, APC, is the ruling political party in Imo State, with Senator Hope Uzodinma as the Governor. However, the major opposition party in the State is the Peoples Democratic Party, PDP.

The APC in the State sees the PDP as its headache as it constantly points fingers at PDP in whatever happens in the State.

If the roundabout at Naze commissioned a month ago has collapsed now, check PDP for answer.

This has been the situation since Uzodinma’s administration arrived on January 14, 2020.

At the height of insecurity when some dare devil Hoodlums attacked the State, wreaking havoc at the State Police Headquarters and Correctional Centre, the APC was short of telling the world that it was PDP that imported the Gunmen.

After so much “Speaking in tongues” by the Governor, till date, Imo people are yet to hear or read the names of those said to be masterminds of the Owerri invasion, which the State Government described as “Politically motivated”.

And in truth, the PDP in the State has remained the “Eyes of the people” as the main opposition party, and not to cause mayhem or chaos, but to checkmate the excesses of the ruling party as enshrined in the constitution in a democratic environment.

Despite all intimidations, the Imo PDP has refused to shirk from its duty, and allow the ruling party to do as it wishes with Imo common wealth, by putting the Government on the spot to give account to the masses.

And these are done through critical and constructive criticisms, which rather than spur Uzodinma on and listen to the people and do the needful, the opportunists around the Governor want the opposition obliterated so that the locust days will continue unchecked.

Indeed, Imo APC and the Government are out to stop PDP from gaining any foot hold in the State, as the ruling party is scared of leaving power in 2024.

As part of this measure, the APC in the State has continued to poach PDP members as much as those that will fall to the dangling carrots.

The party has concentrated on those whose profiles were not known before, until PDP groomed them into prominence, particularly PDP’s Media Team.

But quite fortunately for the PDP, it does not rely on already made products like Imo APC that cannot nurture theirs and “manufacture” man power like PDP.

So, the more APC poaches PDP materials, the more Imo PDP develops more to the chagrin of APC.

Recently, the Imo APC became apprehensive with the  successful outcome of the National Convention of the PDP held in Abuja.

This could be deciphered from the manner some of its Media chaps, unfortunately those poached from PDP, attacked the result of the Convention, which the PDP at the National, and in Imo  State came out unscathed and more united as against the doom predicated by APC hirelings.

At the National level, the PDP National Convention went with fanfair and love, to the extent that most of the officers emerged through concensus, which was the height of discipline and understanding that reign among PDP members.

Till now, there is no petition against any of the winners, as not any sad incident has been recorded as PDP members trooped in and out of Abuja to their various destinations.

And in  Imo State, the PDP rather than implode is now more united, as against what Imo APC members had predicted for the Party.

Today, Imo PDP has produced one of the highest positions at Abuja, with a son of the soil, Senator Samuel Anyanwu emerging the National Secretary, unopposed, at the National Convention.

On ground to support Anyanwu at the historic day was the Leader of PDP in Imo State, another great son of Imo and former Governor, Rt Hon Emeka Ihedioha, with the entire Imo PDP hierarchy.

Ihedioha had made it clear that Senator Anyanwu’s victory is that of entire Imo PDP, who remain on one page, as the party’s scope expands, with some senior APC members in the State set to join PDP in weeks to come.

Therefore, Imo PDP which has remained peaceful and tight, after the nomadic and Food is Ready politicians among them pursued easy lucre to APC, will soon be brimming to the seams with more members.

What is going for Imo PDP is that it has in majority reliable and diehard members. The political Merchandise within Imo PDP have since migrated to APC in search of “Goods”, which has turned a good omen for Imo PDP.

If Imo PDP did not have committed members, the  APC  “bubuyaya” would  have swung many out of the party to APC, which till date is yet to reward the PDP members who jumped before looking.

PDP remains a big and National Party, and therefore cannot be diminished in Imo State, and is now poised to move on bigger and stronger with Ihedioha and his brother, Sam Daddy putting their acts together for the party.

In the first place, PDP remains focused and less chaotic, than APC in Imo State.

The PDP has a National Board of Trustees BOT, with an elected National Working Committee NWC, and an existing National Executive Committee, NEC, all through due process.

But APC till date has no BOT, and functions with an Interim National Executive, headed by a sitting Governor.

In Imo State, the dust raised by the APC State Congress, which was postponed more than three times before it held, is yet to settle. The greatest opposition APC has in the State is APC, where top members fight dirty.

While Imo PDP allows the Leaders in the Wards to facilitate the emergence of Officers that would be loyal to the party, and to whomever is chosen by the Leaders at the State level, in APC, only one Leader, the Governor, directs how all the Ward Chairmen, Women Leaders, Youth Leaders, Organizing Secretary and Treasurers are produced and left in the hands of one person. This has caused silence murmuring within Imo APC as some of the Leaders do not even know their Ward Chairmen, who will now take instructions from outside on how to run political Wards that have their own peculiar problems.

Therefore, Imo APC is in just one hand, as the “Local Leaders”, lose their Wards to outside influence. A dangerous scenario to grass root politics.

Infact, when PDP Defectors,  but now APC Media machineries condemn PDP, they forgot that Imo APC, and even the Government are all products of PDP.

Some of them were formerly Commissioners, and Local Government Chairmen under PDP Governments in Imo.

Therefore, Imo APC has no moral justification for the pouring of odium on Imo PDP, even though caused by phobia and politics.

The present State Chairman Macdonald Ebere was a product of PDP as Chairman of Owerri Municipal Council.  Even the Publicity Secretary, my brother Cajethan Duke, was once in PDP from where he moved to APC.

Imo PDP members should be commended for standing firm amidst various challenges to act as the opposition and the eyes of the masses.

The likes of Emeka Ihedioha, Samdaddy Anyanwu, Charles Ugwu, Kemachikwe, Ambrose Ejiogu, Osita Nwaneri, Mgbewelu(snr),Prof Jude Njoku,Chris Okewulonu etc are committed  “one party” men for having remained faithful to PDP for years.They are really disciplined politicians and IMO PDP is proud of them.