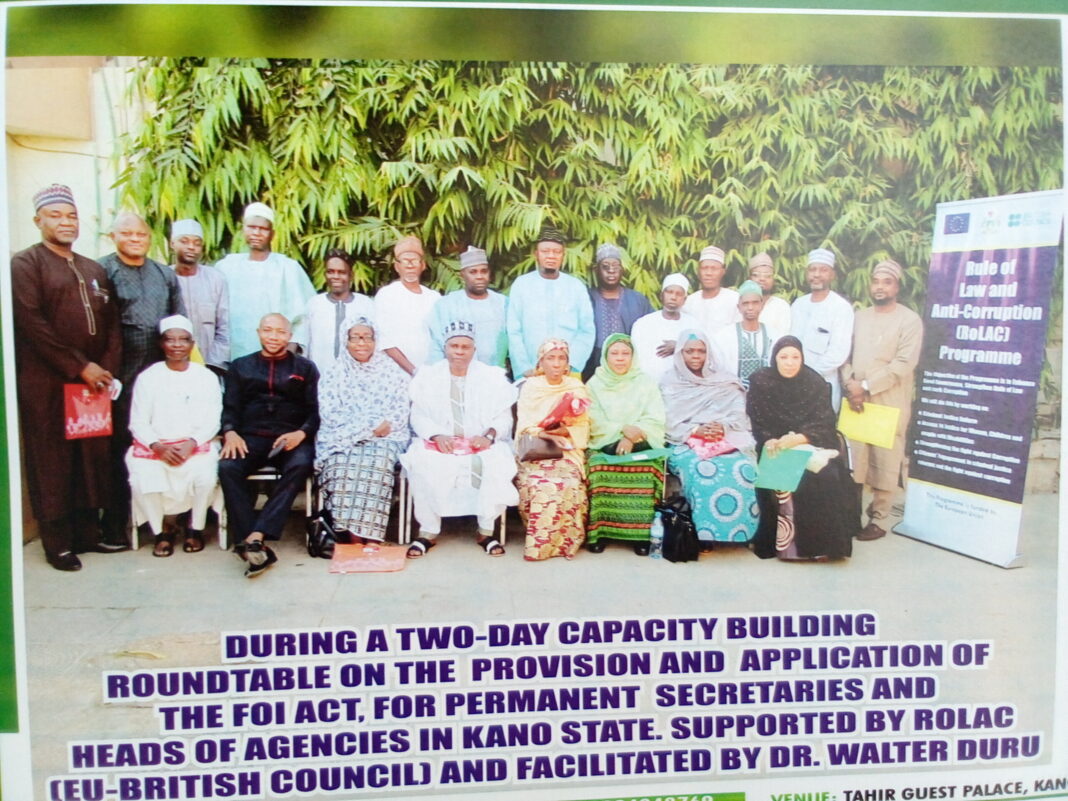 In furtherance of its commitment to supporting the implementation of Nigeria’s Freedom of Information – FOI Act, the Rule of Law and Anti-Corruption -ROLAC programme of the British Council (funded by the European Union) has trained about one hundred Permanent Secretaries and Desk officers of public institutions in Kano State on the provisions and application of the FOI Act.

In his presentations, ROLAC’s Lead Consultant on the Freedom of Information Act, Dr. Walter Duru explained the duties and obligations of public institutions under the FOI Act, even as he did an overview of the Act.

Duru, who also chairs the Board of the Freedom of Information Coalition in Nigeria -FOICN described the FOI Act as a veritable tool for the country’s war against corruption, even as he charged the participants to take its implementation seriously.

Earlier in his speech, ROLAC’s Team Lead in Kano State, Ibrahim Bello commended the present administration in the state for taking steps towards implementing transparency initiatives.

Describing the FOI Act as an important tool for citizens to hold the government accountable, Bello called on the Kano State government to take urgent steps towards having a state version of the Law, with a view to bringing it closer to the people, while taking ownership.

See also  At 50, Pantami is Worth Celebrating – Solomon

Bello, who described Dr. Walter Duru as one of the leading lights on the FOI Act in Nigeria also made a case against what he described as indiscriminate redeployment of those appointed as FOI Desk officers in public institutions in the state.

In her earlier remarks, Kano State Head of Service, Barrister Binta Lawal Ahmad reiterated the commitment of the Governor Ganduje-led administration to transparency and rule of law.

Represented by the Permanent Secretary in charge of Establishments, Alhaji Umar Liman, the Head of Service expressed the willingness of the government of the state to ensure the implementation of the Freedom of Information Act, assuring citizens of the commitment of the administration to good governance.

It would be recalled that a similar training was held for civil society actors in Kano State in October, 2021, with support from ROLAC.

The Roundtable was put together by ROLAC, in collaboration with the Media Initiative against Injustice, Violence and Corruption-MIIVOC.