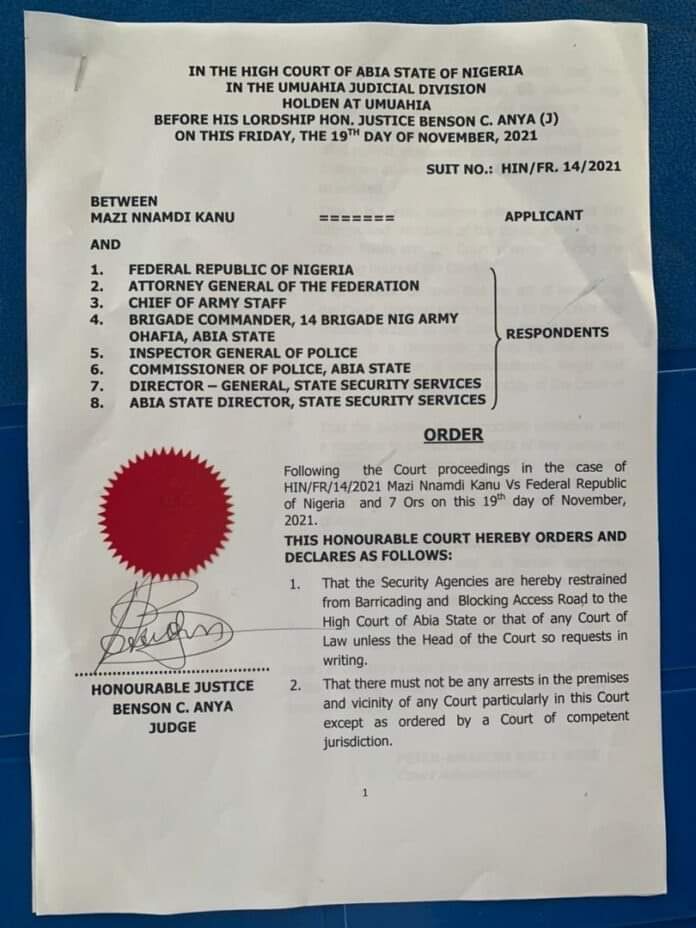 A High Court sit­ting in Umuahia, Abia State has restrained security agencies from barricading or blocking access roads leading to the court during cases, unless the head of the court so requires.

The judge also ordered that there must not be any arrests in the prem­ises of the court, partic­ularly in the court, ex­cept ordered by a court of competent jurisdic­tion.

According to the order given during the court’s sitting on Friday, Novem­ber 19, 2021, when the case came up for hearing, the legal practitioners, litigants and members of the public must be al­lowed free access to the court without hindrance.

The court noted that in the administration of justice, only the prison officials and policemen posted on official duty are allowed within the court of law and it is so ordered.

The judge said it was unlawful to restrict citi­zens and members of the public access to the court room and court premis­es during the working hours of the court.

Justice Anya declared: “The act of barricading the court, blocking the roads leading to the court and impeding ac­cess to the court prem­ises and court rooms in a democratic society by any person under any guise is unconstitution­al, illegal and an abuse of the integrity and sanctity of the court of law.”

He maintained that “the judiciary is a dem­ocratic institution with a mandate to protect the rights of any person or persons who approach the court to ventilate their grievances.”

Justice Anya stressed that it is unlawful to mil­itarise the court or cause it to perform its function under the force of arms.

He further ordered that the Federal Gov­ernment and all parties concerned must protect the sanctity of the judi­ciary, the freedom and constitutional rights of the people.