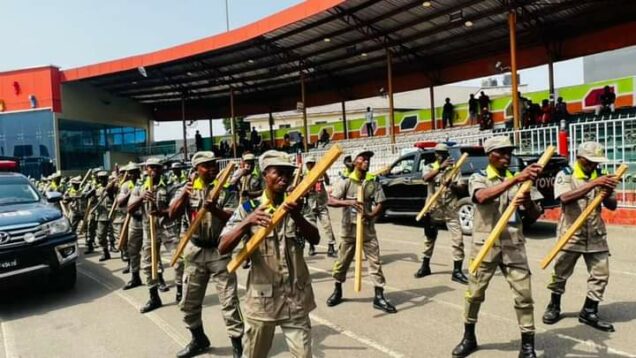 The Association of Local Government of Nigeria, (ALGON) Ebonyi State Chapter , on Tuesday, condemned the motion moved by members of the National Assembly from Ebonyi State, calling for the disbandment of Ebubeagu security outfit in the State.

The association in a statement issued by the State Chairman, Princess Nkechinyere Iyioku, expressed regret that such a motion was coming from elected members of the National Assembly who ordinarily ought to know and understand the very importance of security in the place of good governance.

She expressed shock at the fact that elected representatives of the people at the national level who should be primarily preoccupied with the welfare and security of the constituents would move such a curious motion.

She said, “First and foremost, ALGON views the motion as laughable and also highly bewildered to note the fact that a group of PDP lawmakers who the good people of Ebonyi State across all different constituencies went to the ballot, gave their mandate to go, fight and protect their interests, security, growth, and development at the National level will be the ones to move a motion seeking for what would bring Ndi-Ebonyi to the dark days of old.”

Princess Iyioku who is also the Chairman of the Ohaozara local government area said that the federal lawmakers should hide their faces in shame as the motion has attracted wide condemnation both from within and outside the state.

She noted that “The motion would go into history to be a complete spat on the faces of the good people of Ebonyi, and we are saying that we expected something better from them rather than going there to undermine the support and goodwill that the state government have received since it set up the EbubeAgu Security Network”

“As those who are in the grassroots and closer to the people, it is imperative to put the records straight and better educate and clarify the general public as against the lies, falsehood, and propaganda of the PDP elected members of the House of Representatives. Ebubeagu Security Network is a Local Vigilante team established and duly backed up by law.

“The State Network is not just a creation of Ebonyi State but it cut across the entire States of the South East region and the sole purpose of her creation is to complement and aid the efficiency of the Nigeria Police Force and other Law Enforcement Agencies in helping to secure lives, properties and combat crimes within both rural and urban communities”.

“It is also worthy of note that before the Ebubeagu Security Network was launched its personnel were subjected to intense Military drilling and training by the concerted efforts of selected Officials from the Nigerian Army, Police Force and Civil Defence for some time and well oriented with the Modus Operandi and code of conducts in relating with innocent civilians”.

“So as regards the white lie being meddled by the PDP members of the House of Representatives alleging that the operatives of Ebubeagu are not professionally trained, having detention cells and also go on a rampage with AK 47 and AK 49 rifles alongside other dangerous weapons; is a confirmation of the fact that they are disconnected from the people they represent”.

“The Ebubeagu law 2021 stipulates that every arrest made must be handed over to the police within a time frame. This vague allegation only shows to all Nigerians that the motion is a sponsored campaign of calumny against the outfit.

We had expected the PDP members of the House of Representatives to sponsor bills, move a motion that would reduce the pains and travails of the poor masses, and help in consolidating the glorious achievements of Governor David Umahi.” She added