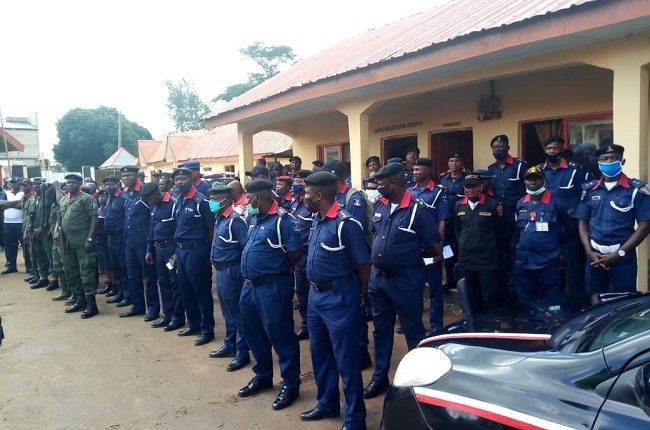 This is contained in a statement by NSCDC Public Relations Officer (PRO), Mr. Olusola Odumosu on Thursday in Abuja. The News Agency of Nigeria (NAN) reports Peller, representing lseyin/ltesiwaju/ Kajola/lwajowa Federal Constituency in Oyo State, had his NSCDC security details withdrawn on Wednesday.”The letter from the Oyo commandant was sent to the lawmaker without clearance.“

The leadership of the NSCDC dismisses as unauthorized and without recourse to the Corps constituted authority, a letter signed and sent to a Member of the House of Representatives, informing him of the withdrawal of officials of the NSCDC assigned to him.

“Not only did the officer in question lack the power to do such, but he was also found to have acted on his whims without clearance.

“The Commandant General, Dr. Ahmed Audi, has therefore directed a reinstatement of the withdrawn officers with a complement of necessary courtesies to the Honourable Member,”NAN reports that on Wednesday, Peller proposed scrapping of the NSCDC.

Peller proposed that the Nigerian police should take over the responsibilities of the NSCDC.

The lawmaker made the proposal to the House via the National Security And Civil Defence Corps (Repeal and Transition) Bill 2022, which passed the first reading on Tuesday.

The bill seeks to repeal the National Security and Civil Defence Corps (Amendment) Act 2007, establish a transition management committee to superintend over the NSCDC, develop regulations and implement procedures for the transfer of assets and personnel of the corps to the Nigeria Police Force, and other related matters.

In the bill, Peller noted that “fragmentation of security resources across multiple competing agencies is counterproductive.”

The lawmakers also noted that the mandate of the NSCDC “has now become a duplication of the Nigeria Police Force,” adding, “this has led to avoidable conflicts.”(NAN)