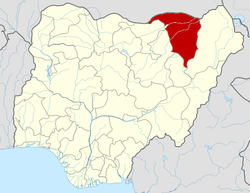 This is contained in a statement issued by the Spokesman, ASP Dungus Abdulkarim, in Damaturu.

In his own words, he said:

”The suspect lured the minors into an uncomplicated building and committed the dastardly act. The perpetrator is in detention. The matter has been transferred to the state Police Headquarters in Damaturu for discreet investigation.

”He will be charged to court soon,” Abdulkarim said.(NAN)

Ibrahim was arrested on Jan. 31