On That Hug That Made Tongues Wag 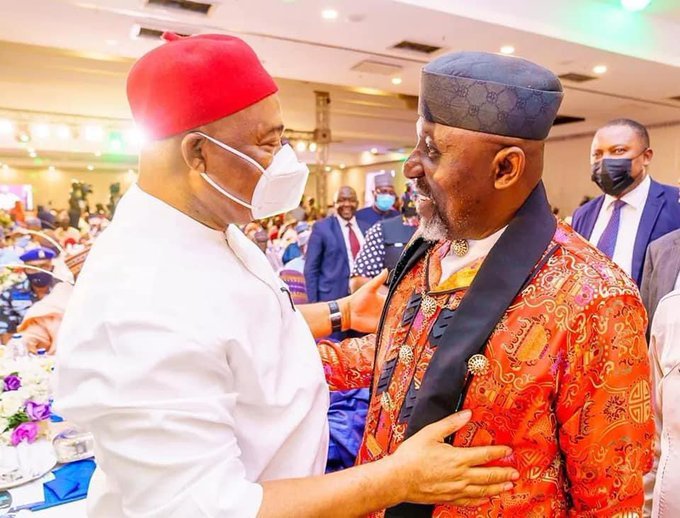 Few days ago at the Yobe State Education Fundraising event, which held at Ladi Kwali Hall in Sheraton Hotel and Towers Abuja, there emerged pictures and videos showing where Governor Hope Uzodimma and Governor Rochas Okorocha hugged each other. Since then, many tongues have been wagging and trust the social media for making a mountain out of a molehill.

It’s being presented as if it was very monstrous for both men to have embraced each other. May be the critics expected them to behave like women who live in Face-Me-I-Face- You with abundance of hatred for each other. But, it shouldn’t be so. Let it not be told that Governor Hope Uzodimma was acting out a script of hatred for Governor Rochas Okorocha; rather, Governor Hope Uzodimma is setting up a standard to checkmate excesses in governance and to do that he never minded whose ox is gored.

I was privileged to be in a Keke bus from Obinze to Douglas Road and that was the discussion on board the bus. One man lamented how wicked politicians could be. He said that right from the onset that he knew it that Governor Hope Uzodimma was playing to the gallery by pretending to probe Rochas Okorocha. He said that politicians were like chameleons that could change anytime. Everyone in the bus accepted his position on the matter even as contrary opinions later came up.

One of the women in the bus said that nothing in this world would make him hate Governor Hope Uzodimma because he has truly been fighting corruption to the extent that his appointees have been afraid of doing the contrary. She said that she works in the Ministry of Health and was glad to receive her thirteenth month salary  and that it was God who used Hope Uzodimma to pay Imo workers back what Rochas Okorocha took from them for 8 years.

The bus driver cursed politicians for making life miserable and wondered whom Imo people would trust. He asked if there was any difference between Hope Uzodimma and Rochas Okorocha. Just then a man in his mid 60s, who sat in front beside him, explained that Governor Hope Uzodimma seemed to be the most focused governor ever undermining the challenges he faced. He said that the roads he has built so far were standard attestations that Imo State would be better after his tenure. He even explained how the road to Orlu was being constructed like the ones in Abuja and Lagos.

One young boy who sat at the first seat and looked like someone that just recovered from Mkpuru Mmiri addiction shouted, ‘Na Dem dem’ and everyone wondered the sense in his vocalisation of nonsense. He never spoke again until someone raised a pertinent question to everyone: What is wrong with Governor Uzodimma hugging Governor Okorocha in Abuja?

It was the same old man in his early 60s who truly spoke like a sage. He said that a true politician embraces his fellow after each political tussle. He added that there was nothing wrong in the two embracing each other in public because it shows maturity and brotherhood. However, the hugging shouldn’t in anyway affect the programs of the government of Governor Hope Uzodimma, whom he said was hellbent on setting a record of transparency in the state. The hugging does not change the fact that Rochas Okorocha was being investigated.

One of the ladies who sat at the back seat added her voice to the issue by saying that Governor Hope Uzodimma never seemed to her like a man who was out to play the game of ludo with anyone who had stolen his dice before. She said that the current land recovery committee headed by the former vice chancellor of Imo State University, Professor Ukachukwu Awuzie, is a serious composition that must not be triffled with because the crop of people there won’t back down in their given assignment to recover the lands  usurped by Rochas. She said that no serious governor would mess with such crop of astute personalities. She concluded that the recovery fight by Governor Hope Uzodimma is not a child’s play.

All thanks to the traffic jam that kept us for forty minutes or more at the Control Post but it was worth it. At least our people are becoming conscious of the happenings in the government of the day. Just with the hug by Hope and Rochas many people are already screaming that the governor was compromising with  Rochas. What does this reveal? The fact is that people are earnestly yearning for justice against Rochas’ alleged looting and land grabbing.

But, take your time and watch the video, you will understand that there was nothing in it that revealed that both men had reasons to change their gears. May be many people expected them to walk past each other so that people will get reassured that the probe can’t be stopped as the recovery fight persists. The critics wished that the two governors snubbed each other so that they would be reassured that there was no selling out by Governor Hope Uzodimma. Maturity is part of good leadership acumen.

That hug was too minor to create pictures of compromise because it would be sheer idiocy if both leaders should snub each other as one was trying to correct the excesses of the other. But, it seems as if there are no good news to write about in the social media anymore if not gossips and suspicion. Enough of these idiotic outbursts of nonsensical feelings of fear. Let’s not forget that Governor Hope Uzodimma has the opportunity of writing his name in gold and if by mere hugging he changes his mind on the good works he’s doing then let’s allow posterity to judge him.

As far as I am concerned, that hug was never a way to tell us that our Hope has failed us; rather, a way to show that despite every issues, men will always be men. As Governor Hope Uzodimma recovers the loots and put Imo State back on better economic pedestal, let the misguided critics stop their crude imaginations out of mere handshakes and unaligned hugs.