Why North is Imploding 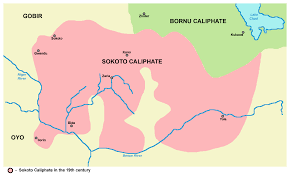 SOMETHING extraordinary is happening in Northern Nigeria, alias Arewa. The sons of the poor are up in arms. In cahoots with foreigners from far and near, they are killing their own kinsmen, women and children.

They are kidnapping them for multimillion naira ransoms, destroying their own communities and driving away the elite to Abuja. The poor are fleeing in droves to the South.

The evil seeds sown over the past 218 years by the founders of Sokoto Caliphate, the most backward Islamic system in the world, have grown and are bearing fruits in multiple folds. Muammar Gaddafi’s Libya, Iran, Saudi Arabia, Turkey, United Arab Emirates and a host of other Mid-Eastern peaceful and prosperous countries are also rooted in the Islamic culture.

Arewa and the wider Nigeria society it controls are fractured because of the unwholesome exploitation of Islam by founders of Sokoto Caliphate. It is a system that keeps the elite in snug opulence without any regard for the grassroots.

It is highly oppressive, wicked and bloody. It operates by divide and rule. It is an enterprise rooted on fraud and corruption; a pirate system which is incapable of building an inclusive, prosperous country.

Meaningful development has stalled all over Nigeria because we surrendered our birthrights to the political buccaneers of the Caliphate. We are all drowning in the rot foisted upon us by this evil system. Those of us who complain are called names.

What is happening in the North is a revolt of the oppressed grassroots against the system. In the North West, the Fulani herdsmen, who have been downtrodden by their own powerful and affluent kinsmen, have also taken up arms.

They are killing everything in sight and abducting those they can lay their hands on for ransom. They are rustling cattle and creating little empires of their own in the ungoverned spaces of the Sahelian wilderness.

They will soon start setting up political territories. Take it to the bank: The Bandit Terrorists will soon adopt a political agenda and position themselves for an Islamic theocracy to upstage the Sokoto Caliphate. Indeed, that was what Sheikh Ahmad Gumi tried to persuade them to do.

The Bandit Terrorists are mainly Fulani nomadic herdsmen who were kept in the bushes to rear livestock for their affluent and powerful kinsmen who call the shots in the government houses and bureaucracies, emir’s palaces and mosques. For over two centuries, their own powerful kinsmen kept them marginalised, feeding fat from their nomadism.

While the “home” Fulani freeloaded off the milk and honey of Nigeria, sending their pampered children to the best schools in the world, the “bush” Fulani had no access to modern education, health,  other basic amenities. They lived with their livestock among wild animals. The world passed them by.

Meanwhile, the forests in which they grazed their animals were rapidly being converted to farms and housing/industrial projects by the owners and governments. For instance, those who used to graze their animals in today’s Abuja have nowhere to go.

Unlike the more progressive Igbo, Yoruba and other tribes which embraced education and created free escape routes from poverty for their grassroots, the Fulani elite, in their blind selfishness, kept their own cousins hidden in the bushes. Only Professor Jibril Aminu, as an education minister, lobbied General Ibrahim Babangida of the need for “nomadic education”.

See also  Biafra of the Mind

It was a carbon copy of Muhammadu Buhari’s “Ruga”. Aminu’s “nomadic education” did not raise much eyebrow because it was not presented like “Ruga”, a land-grabbing ploy, as it was perceived, especially in the South. The scheme, however, collapsed shortly after Babangida left power.

Many of the nomads were already turning to crime, mainly cattle-rustling, when some desperate Fulani political leaders plotted to use them to force their way back to power after Buhari lost the 2011 election.

The story of how local and foreign Fulani were assembled in the bushes of Zamfara and Niger, armed and trained to come out and fight if Buhari lost the 2015 election, is in the public arena. No one has refuted it till date. They were promised land all over Nigeria. When the politicians were not forthcoming, the attacks started.

Buhari spent the best of the past six and half years trying to force indigenous landowners to give up their ancestral patrimonies for the settlement of nomads. The moves came in several forms: “Ruga”, “Cattle Colonies”, “Grazing Reserves”, “Grazing Routes”, National Livestock Transformation Plan, “Water Resources Bill”, and others.

Meanwhile, armed herdsmen conducted waves of attacks on farmers and indigenous communities with law enforcement and security agencies doing little to stop them. Indeed, individuals and communities which tried to defend themselves were harassed and arrested.

The Federal Government even sent the military to the South East to hunt down people suspected to be members of the Eastern Security Network, ESN, which was established by the Indigenous Peoples of Biafra, IPOB, to defend their people against armed Fulani herdsmen invaders.

These were desperate measures taken by the ruling Fulani elite under Buhari to force indigenous Nigerians to pay for the Fulani neglect of their own grassroots. But, of course, it has not worked; will never work.

It has only led to unrequited bloodshed and the needless stigmatisation of an ethnic group that many Nigerians used to admire for their beauty, exotic culture and deft political and administrative acumens.

Now that the North West bandits have been declared as terrorists like Boko Haram, we must bring them to heel. After that, nomadism should be outlawed and nomads brought into the civilised population to live under the law as normal humans and citizens.

The foolish attempts to seize lands from indigenous people for allocation to the nomads must continue to be resisted till they drop it. The dog cannot eat excrement while the goat suffers rotten mouth!