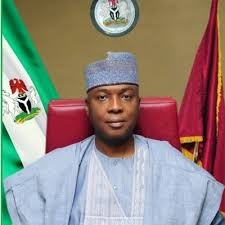 A group, Coalition of Saraki Advocates (COSA), Kaduna State Chapter, has supported the People’s Democratic Party (PDP) on its plan not to zone the 2023 presidential election to any of the six geo-political zones.

The State coordinator of COSA, Yasir Kamal, in an interview with the News Agency of Nigeria (NAN) on Monday in Kaduna, also restated their support for a former Senate President, Dr. Bukola Saraki, on his presidential ambition.

He said the PDP’s decision not to zone the presidency would give Saraki an edge over other candidates in the party who are rooting for the same seat in 2023.

“We are totally in support of the PDP chairman’s decision on not zoning to contest primaries in the party and we believe it will give Saraki an edge to win the party’s presidential candidacy,” he said.

Kamal argued that the North-Central Zone deserved a shot at the presidency, saying “Despite the immense sacrifice made by people of the zone in order to build the PDP, restore and sustain democracy since 1999, no one from the zone has been considered for the job,” he said.

He called on the leadership of the PDP in the North-West to put their differences aside and work towards what would benefit the party.

“We are all PDP members, what they should think about is the party first before personal interests to promote it so as to secure victory in the 2023 presidential election,” he advised.

NAN reports that the PDP Deputy National Publicity Secretary, Abdullahi Ibrahim, on Feb. unequivocally said the leadership of the party was considering scrapping the idea of zoning for the 2023 Presidency.

He said the party might drop its zoning culture and throw the presidential primary open to all eligible members from all over the country.