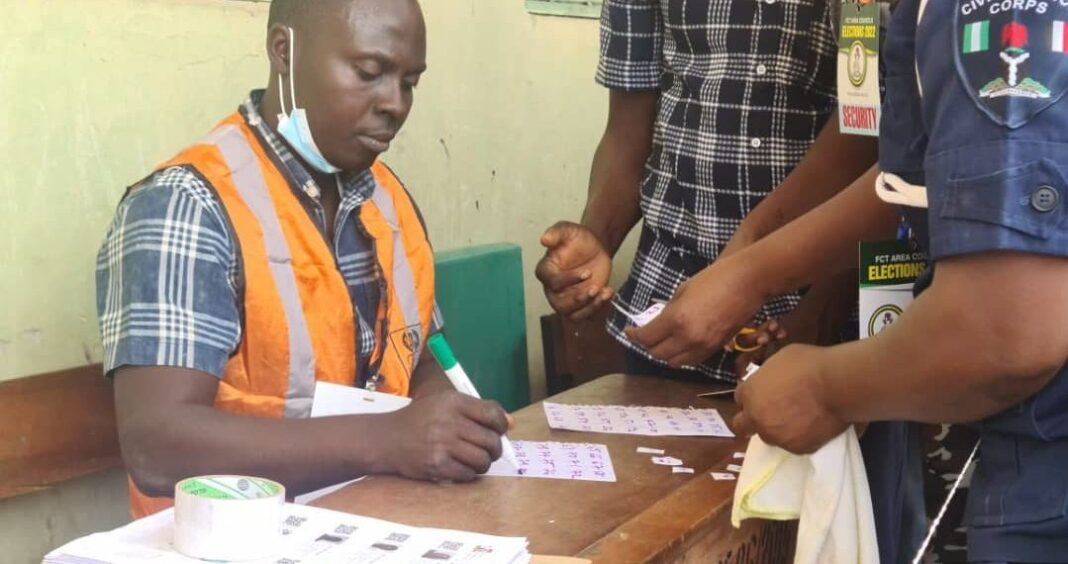 A total of 55 candidates contested to be the chairpersons of the six area councils. Only three of the candidates (9 per cent) are women.

The local council elections held on Saturday in the Federal Capital Territory (FCT), Abuja, have again brought to fore the low representation of women in Nigeria’s politics and governance.

The election was held in 2,229 polling units of the 62 wards in the six area councils of the Nigerian capital. About 1.3 million people registered to vote in the polls.

A total of 55 candidates contested to be the chairpersons of the six area councils. Only three of the candidates (9 per cent) are women.

Also, all the 55 candidates, by law, had to have running mates, who if elected would be the vice-chairpersons of the area councils. Of the 55 running mates, only eight (15 per cent) are women.

The FCT Area Council election presented an opportunity to improve the electoral process at the local level and deepen democracy within the area councils.

Unfortunately, as in the other parts of the country, the election also confirmed the poor political representation of women in Nigeria.

All the 14 political parties that took part in the Abuja council elections were guilty of low female representation, but some were worse than others. The poor performing parties include Nigeria’s two largest parties, the ruling APC and the main opposition PDP.

Data from the electoral commission, INEC, shows that at least four political parties – APC, PDP, Action Alliance (AA) and Labour Party (LP) – had no female candidates vying for any seats in the 2022 FCT Area Council Elections.

The All Progressive Grand Alliance (APGA) with 10 candidates had the highest number of women candidates for the 2022 FCT Area Council elections.

Since Nigeria returned to democracy in 1999, after several years of military rule, the country has completed six election cycles. In all the elections, the low representation of women has been a constant.

Through the years, there has been a consistent clamour to address the gender imbalance. Yet, women have remained a vastly underrepresented minority in political power across Nigeria.

Nigeria has not had a female president or vice president. However, there have been few female aspirants who contested for such offices in the general elections.

Also, no female governor has been elected into office since the beginning of the fourth republic. The deputy governorship is the highest executive position women have held since 1999, data from the Independent National Electoral Commission (INEC) showed.

For the office of the deputy governor, only one woman was elected into office in 1999; in 2003, the female deputy governors became two and by 2007, the number had increased to six, before dropping to four in 2019, representing 11.1 per cent.

The data on female senators has also been low. Out of 109 seats available, only three senators (2.8 per cent) were elected in 1999.

Similarly, only a few women have been elected into the House of Representatives compared to their male counterparts. Between 1999 and 2007, there was an increase in the number of female lawmakers before the numbers declined in 2011.

The emergence of female lawmakers dropped to 19 (5.3 per cent) in 2011 and 2015 respectively. This would further plummet in the 2019 general elections as only 11 (3.1 per cent) women were elected into the house of representatives.

Idayat Hassan, the Director Centre for Democracy and Development, CDD, said the gender imbalance keeps recurring because of women’s financial constraints and because political parties are not giving adequate considerations to women.

Ms Hassan said generally, women do not have the money and for political parties to put you forward, you must have money or be able to attract donations.

“This problem is more concentrated on the dominant APC and PDP. They tend not to present women during elections and even when they do, the internal party politics will ensure that women do not emerge as the final candidates.

“At the end of the day, the women will go to non-viable platforms which of course do not have the resources to reach the people. Until we have more women as candidates it will be difficult to achieve the high numbers that we want,” she told PREMIUM TIMES.

One way to address this, Ms Hassan said, is through the quota system.

Hope on the horizon?

In a recent study, the CDD said despite the prevailing challenges facing women in Nigerian politics, there are some reasons for optimism.

The study, a citizen’s perception survey on the attitudes of Nigerians towards female candidates in the political space, surveyed 7,396 persons (roughly 49 per cent female and 51 per cent male) between September 2019 and June 2020.

Conducted using a stratified quota sampling technique, it covered all 36 states and the Federal Capital Territory (FCT), Abuja, to explore citizen’s perceptions of women’s participation in electoral politicsAbout 86 per cent of the respondents said they would vote a woman into public office, while 85 per cent of those polled thought that women would bring about positive changes in society through sound public administration.

“The same percentage of respondents strongly affirmed the proposition that women could bring change to society if elected to public office.”

The survey suggests that social norms often presumed to explicitly exclude women from political participation might either be losing strength or may not be as widespread as often been assumed.