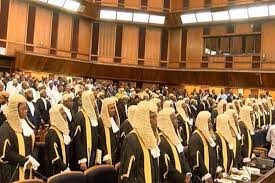 A Lagos-based human rights lawyer, Mr. Inibehe Effiong (Esq) has lamented that up till now, judicial autonomy is still illusive in Nigeria.
He noted that such has reportedly subjected chief judges to kneel before state governors for them to make monetary releases for execution of judiciary projects.

Effiong, who was a guest speaker at the ‘Excellent Summit Law TED Talk 2022’, Faculty of Law, University of Uyo, Akwa Ibom State, noted that Section 81 of the constitution and section 162, allow judiciary be placed under first line charge to guarantee its autonomy but regretted that such is yet to be realised in Nigeria.

According to him, “They have turned judiciary to a department in the ministry of justice, now, every month, chief judges have to go and kneel before governors to plead for money in order to execute projects for the judiciary, even for things as petty as printing of almanacs.”

The human rights activist, who spoke on the theme, “Lawyer: The voice of the voiceless,” noted that such an act would tie chief judges to the apron strings of governors, thereby hampering justice in matters the governors may be interested in as they would be under pressure to please the governors.

“You know when a governor has interest in a matter, the judge will be under pressure because the judiciary, unfortunately today, is not totally independent,” he said

Addressing the final year students, Effiong, who is an alumnus of the faculty, noted that before they can give voice to the voiceless, they should, first of all, build their foundation by taking their studies seriously, adding that they should not take their law clinic for granted as such would groom them on some of the practical realities they may face as lawyers in future.

He also charged them to be confident, shun cultism, be tenacious and always have the courage to say what is right.

When asked of his stance about the agitation of the Indigenous People Of Biafran, IPOB, he said, “I don’t believe Nigeria should be polarized, if you split Nigeria today and you have Biafra, the same people who impoverished Nigeria will also be in Biafra, and hold political power, the problem is not about separation of Nigeria but squarely on leadership.

“I support article 20 of the African Chatter, that guarantees the right to the man’s self-determination and you cannot criminalize a right that is recognized under international instruments to which Nigeria is a signatory, that is recognized under our constitution in Chapter Four, I believe they (IPOB) have the right to protest and demand for a different country provided it is done lawfully.”