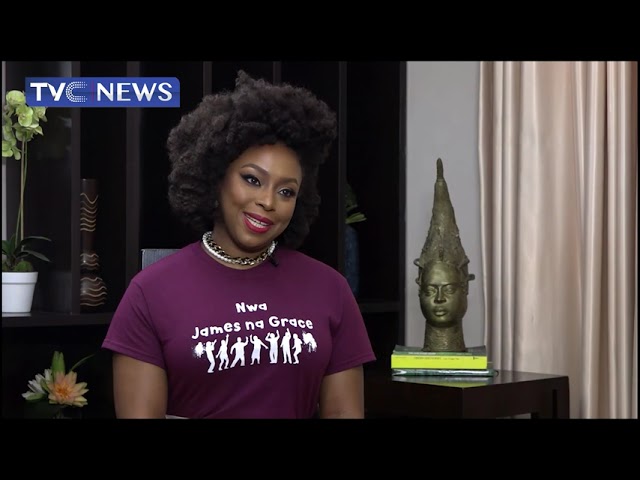 Adichie said the priest’s actions have made the grieving process more difficult for her and her family.

In a special interview with TVC News which aired on Sunday, celebrated Nigerian writer, Chimamanda Adichie, addressed shocking events that unfolded at the church where her mother’s funeral thanksgiving Mass was held.

At her mum’s funeral, thanksgiving Mass took place at St. Paul’s Catholic Church in Abba, Njikoka LGA of Anambra State; the grieving family of Adichie sat at the front pew of the church. However, they were unknowingly about to witness a shocking ordeal.

She revealed that during his message on that fateful Sunday, the parish priest started speaking about her in an unpleasing manner, and the contents of his speech left her in shock.

“I was taken aback to hear my name.” The priest, she revealed, Christopher Eze, referred to an interview she granted months ago.

“I have never been afraid of criticism. The fear of criticism is not something I have. If this priest had written something to criticise me or even shouted at me at any other venue but the holy mass at my mother’s funeral, it would have been okay. I really would not have minded,” she said.

Nevertheless, she said she found it unsettling that the same church where her mother was a devoted Catholic and spent her last hours on earth was where she was being verbally abused on a day that was supposed to be her mother’s funeral thanksgiving Mass.

She also alleged that the said priest had done collections of N10 from the church members who are villagers struggling to feed themselves in the past.

“Why do you need to ambush poor villagers who can hardly feed themselves?”. She shared that the same priest had also harassed her family for money when it was time to bury her father, who passed in 2020. They presented a cow to the church, and he was upset because he wanted a monetary offering. “When I gave money to the church for Bazaar, because I knew that he always wants cash, I made sure to go and get cash” because he rejects cheques and bank transfers.

A shocking revelation was that during the tenure of a previous priest in the same church, they locked the church doors to prevent people from going out until the exceptional collection was over – this she stated was one of the reasons she stopped attending church in Nigeria.

In January 2021, PREMIUM TIMES reported that she stopped attending the catholic church in Nigeria because activities became “way too much” about money, fundraising, and thanksgiving.

“What’s the point of church? We should go to get hope, comfort, and peace. But you go there, and there is so much talk about money.”

When the anchor asked how she’s been navigating the challenging period, she revealed that the priest’s actions have made the grieving process more difficult.

She said: “I cannot help but think of one of the beatitudes, ‘Blessed are those who mourn for they shall be comforted.” But, unfortunately, we were not comforted, and the priest failed. He failed terribly at his duty. Instead of comforting us, he increased our pain.” she stated, still trying to come to terms with having to face such an incident while mourning. “I should be allowed to mourn my mother in peace, but I haven’t been able to because of what this man did, and I haven’t been able to because this man has not faced any consequences for his action.”

After making several complaints for the issue to be addressed, she said she was asked to write a complaint to the bishop, which she did. “The bishop responded to tell me that he would not be able to do anything, and the reason was that I had talked about the incident at the Bishop’s Conference where I had been invited to speak. Therefore he was now unable to act”.

Adichie revealed that, in reality, the bishop is the authority to discipline the priest, but given this response, it is apparent that disciplinary action will not happen.

She did not name the bishop who has refused to reprimand the priest.

With the issue lingering since May 2021, she said she and her siblings have had to deal with the emotional toll it has taken on them, but for Adichie, this is bigger than her family. “One of the reasons that I want to talk about this publicly is I don’t want what happened to us to happen to any other person. I don’t want that for anybody”.

See also  It's Wicked, And It's Unfair To Owe Senior Retirees - Adegoke

After a video where she was responding to the priest at the funeral Mass went viral on Twitter, it became evident that many have been victims of similar incidents, especially in Catholic churches in the East. “People have had to endure all types of humiliations because they wanted to give their loved ones a befitting burial,” she said.

“Nobody has faced any consequence. We have not received an apology. The wrong that we suffered has not been righted, so how much worse would it be for the people who do not have the platform that I have?”