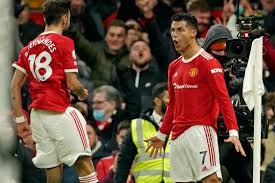 Bruno Fernandes and Cristiano Ronaldo were both on target for Manchester United as they claimed a much-needed 2-0 win over 10-man Brighton in the Premier League at Old Trafford on Tuesday night.

While Real Madrid, Paris Saint-Germain, and Manchester City were all in Champions League action, the Red Devils enjoyed a lower-profile domestic game with pressure having ramped up on the squad and Ralf Rangnick in recent weeks.

Brighton, to their credit, started well as visitors and were the brighter team from kick off, but things then levelled out and the first half was a relatively even contest. With the scores locked at 0-0 at the break, either side might have felt that they could have had the edge.

The second half was slightly different though and Cristiano Ronaldo scored just six minutes after the restart. Scott McTominay won the ball back in midfield and found the No.7 on the edge of the area. Having skipped past a challenge he fired into the bottom corner in his usual clinical fashion.

Brighton‘s day got worse when Lewis Dunk was given his marching orders just three minutes later, having denied an obvious goalscoring opportunity. Protesting for Dunk‘s dismissal before VAR was consulted, Bruno Fernandes was shown a yellow card.

Deep into stoppage time, Bruno added United’s second and joined his compatriot on the scoresheet. A freekick was taken quickly by Paul Pogba deep in his own half, setting his fellow midfielder through to finish.

The win allows Manchester United to move back into fourth place and they now sit two points ahead of West Ham, having 43 points to the Hammers’ 41.

Chelsea remain on 47 points in third and the Blues have a game in hand over United. More worryingly, though, is Arsenal in sixth place on 39 points with three fewer games played. Wolves, with two games fewer played, can also catch up with United as they are six points behind, and Tottenham are seven points behind the Red Devils with three fewer games played.