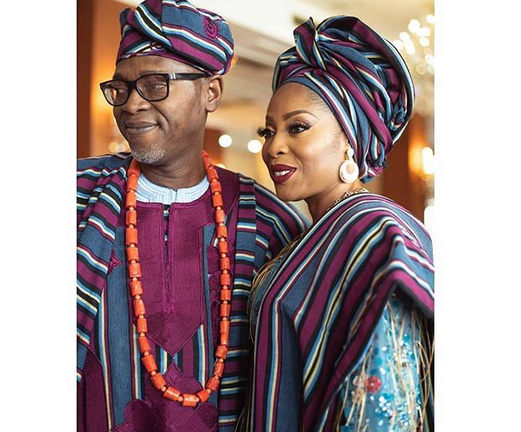 Before they separated, she was married to Tokunbo Abudu, and the union was blessed with two children, Temidayo and Adekoyejo.

Not until recently, the founder of EbonyLife studios, Mosunmola Abudu, famous as Mo Abudu, has kept every detail about her divorce hush.

Not many knew about the media mogul. Before they separated, she was married to Tokunbo Abudu, and the union was blessed with two children, Temidayo and Adekoyejo.

However, the filmmaker has managed to keep other information about her divorce under wraps, not until her interview with popular media personality Chude Judeonwo on Monday. Then, she finally opened up on why her marriage ended.

Ms Abudu, 57, said that despite being good friends with her ex-husband, the marriage ended because “nothing was left of the relationship other than just being friends.”

She said, “It didn’t work because there are other things that make up a relationship outside of just being friends. There were so many other things in the equation at the time.”

According to Ms Abudu, despite the separation from her ex-husband, she said that they are still friends. She said that divorce doesn’t make one’s ex a lousy person.

“I don’t think that because you have decided to separate from your ex means that they were a bad human being, no.”

The mother of two praised her ex-husband as a good father. “Tokunbo Abudu, I’ll say it till tomorrow, is a good father. He remains a good friend of mine. That’s the most important thing in our relationship, and we have two children together.”

See also  For Composer Derrick Spiva, Music is all About Embracing Life

Speaking about their co-parenting relationship, Ms Abudu shared that they plan to care for their children together even as a couple. “When my son graduated, we were both there. When it was Temidayo’s wedding, we planned it together, and we were both there.” I’m not saying some relationships can’t end badly, and then there could be bitterness, but there wasn’t. There was no bitterness in our relationship. We are good friends.

She also highlighted why she was part of the team that secured the right to produce a biopic on Ramon Abbas, commonly known as Hushpuppi, the Nigerian Instagram celebrity facing criminal charges in the United States.

In August 2021, PREMIUM TIMES reported how Ms Abudu secured the rights and partnered with ‘Will Packer Productions’ to develop an untitled project based on a Bloomberg article, ‘The Fall of the Billionaire Gucci Master’ by Evan Ratliff.

Both production houses won the rights after a highly contested bid by several producers, while the movie is now set up at Universal Picture.

She said: “Somebody is going to tell that story. If it is not me, it would have been another international body because it was not only us that was bidding for it,” she said.

“It is just essential that the story is told by someone who understands the challenges he went through, the opportunity he must have had.

“We are not justifying what he did, but we are just saying that there are many lessons to be learned (good and bad) from our youth about the Hushpuppi story.”

The Ebony Life boss was also the executive producer of a television show,’ Moments with Mo,’ the first syndicated daily talk show on African regional television.

According to Hollywood reports, she is rated as the 25th most powerful woman on Global television. And Forbes describes her as Africa’s most successful woman.