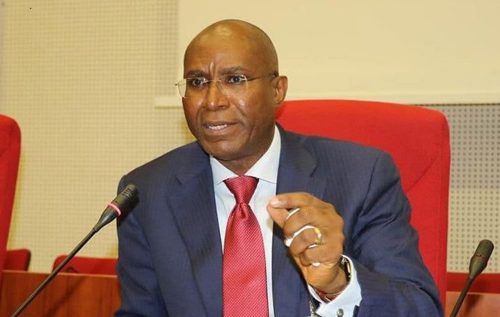 Deputy Senate President, Ovie Omo-Agege, says All Progressives Congress (APC) will take over Delta in 2023, going by recent developments.
Omo-Agege said this on Wednesday in Asaba, at the inauguration of the state APC executives, at the party secretariat in Asaba.

“Let me start by saying that am full of excitement with what is happening here today.
“This inauguration of our state executives is a major milestone in our battle to sack the PDP occupation of the government house, Asaba.
“Our goal now is to defeat Okowa and whoever he is planning to impose on the people of Delta.
“However, as we celebrate, let me remind us that we have a lot of work to do. My chairman, I want to implore you to hit the ground running,” he said.
Omo-Agege advised the new executives to extend a hand of fellowship to all party members, irrespective of their lineage.
“If the APC must win the battle ahead, there must be no victor and no vanquish within the party’s fold in the state,” he said.

The senator reminded the new executives that all members of the party have a common goal, urging them to close ranks and work in unity.
“As we move forward, let us forgive and forget our differences, because if we must win, then we must be united in battle.
“Finally, as we go back home, let us preach the gospel to our people in our various communities on why the APC must occupy the seat of government in Delta.
“Our people have suffered enough, the truth must be told, so let the people we are coming to wipe away their sufferings,” Omo-Agege said.
Sen. Peter Nwaoboshi (APC-Delta) who represents Delta North at the National Assembly, lauded the inauguration of the new executives.

He said that with the successful inauguration of the executives, the APC family had shamed its detractors.
“Those who have been praying for trouble in APC will be so disappointed with what is happening here today.
“We are ready for them. There is nothing they think they know that we don’t know.

“From today on, the battle has started. We are not fighting with arms, but if they try us, we will match them strength to strength,” he said.
Nwaoboshi dismissed insinuations that he was working to return to the PDP ahead of the 2023 elections.
“I heard some people said that am planning to go back to the PDP, but hear me now, I am not someone who vomits and goes back to lick his vomit. “I don’t have the intention of going back to the PDP, but I have the intention of defeating the PDP at the election,” he said.
Mr Omeni Sobotie, the state APC chairman expressed the appreciation for the  support and encouragement from party members.
He promised to work with all stakeholders in the party to chart a new course for the party by ensuring unity, enduring peace and most importantly, victory in 2023.