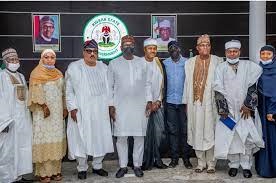 AbdulRasaq said the appointment and inauguration came a day after the sixth Grand Khadi of the state, Justice Muhammad AbdulKadir retired from service on attainment of 65 years of age.

He commended Justice Abdulkadri for his selfless service, saying he duly carried on the great legacies of his predecessors since the court was founded in 1975.

“I pray Allah to grant him a truly restful retirement.
“The tradition of this court of record is for its most senior justice to act as the head of the court pending the appointment of a new substantive Grand Kadi.

“Similarly, this administration will carry on its policy of absolute respect for the court and non interference in the justice system.”

The Acting Grand Khadi, Kamaldeen, described his appointment as an achievement for the judiciary, pledging to work in synergy with relevant staff and colleagues to be able to achieve more successes in office.

He also thanked AbdulRazaq for the appointment and the support of the administration to the judiciary.

“My appointment is not a personal achievement but an achievement for the judiciary in general.

“I am very much aware that I shall only be able to discharge this responsibility by working in synergy with all my brother judges as well as the talents that exist at the bar to ensure a formidable judiciary in the state,” he said. (NAN)