17 Roasted To Death As Tanker Explodes On Lagos-Ibadan Highway 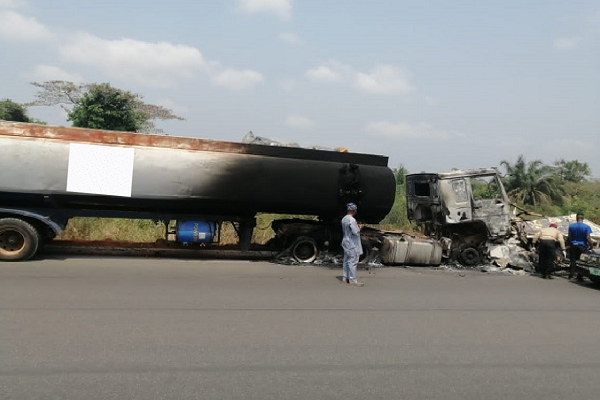 Seventeen persons died with 14 of them burnt beyond recognition when a tanker exploded on Friday morning in the ever-busy Lagos – Ibadan expressway.

The crash occurred around 5.00am by the Isara bridge stretch of the highway with two vehicles with registration number ZT728 KLD(Mazda bus) and a nondescript tanker involved.

The vehicles were said to have had head- on collision due to reckless driving, which triggered explosion that engulfed passengers in the Mazda bus.

Confirming the multiple crash, the Federal Road Safety Corps(FRSC), Ogun State sector Command, said the Isara Police Division and FOS morgue had been notified ahead of planned evacuation of the deceased.

Superintendent Route Commander(SRC) Florence Okpe, who is the FRSC Public Education Officer for Sector Commander, Ogun Sector Command, Umar Ahmed, attributed the cause of the accident to route violation and dangerous driving, which resulted to head- on collision and fire outbreak.

” A total of two vehicles were involved with registration numbers ZT728 KLD a Mazda Bus and unknown vehicle of
unknown make (Tanker).

“The vehicles are partially obstructing the service lane. The Nigeria Police Isara and the FOS Morgue by services Isara have been informed. FRSC personnel from Ogere are on ground managing the situation.

“The Sector Commander FRSC Ogun described the crash as an avoidable one if cautions were put in place and traffic rules and regulations were obeyed.
He Commiserated with the family of the crash victims and enjoined them to contact FRSC Ogere for more information about the crash,” she stated.
Attachments area