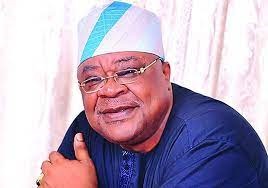 Vice President of Nigeria, Prof. Yemi Osinbajo, on Friday led prominent Nigerians to pay their last respect to former governor, Adebayo Alao-Akala, who was buried at his residence in Ogbomoso.

Governors and other politicians from the two leasing political parties on the country, the All Progressives Congress and the Peoples Democratic Party stormed Beulah Baptist Church, Ogbomoso where the funeral service was held in honour of the former governor before his remains were buried at his residence.

Alao-Akala, who won election on the platform of the PDP in 2007 to become Oyo State governor eventually dumped the party and was the leader of the APC in Oyo State when he died on January 12.

The Vice President Yemi Osinbajo described Alao-Akala as an open-minded politician, who would be missed for his magnanimity and compassion.

He said the late governor served the interest of his people when he was in power and gave quality counsel to those who were around him.

Osinbajo said the late politician in his lifetime as the governor was an accountable personality who improved the Internationally Generated Revenue of the state from N300 million to N1billion.

Osinbajo also described Alao-Akala as a very responsible and respectful to the views of individuals.

He said the late politician would be missed for his counsel and compassion.

Osinbajo said, “Everywhere Alao-Akala went in his days as governor, you would hear the chant of ‘Oyato’. Of course, he really did many things differently in office.

“He significantly improved the IGR of the state from a paltry N300m to N1bn in eight months and put in place very good security architecture.

“Alao-Akala practically demonstrated what is possible when you have creativity and compassion. Since his transition in January, I have read several glowing tributes to his memory and the common refrain running through all of those tributes has been the attestation to his uncommon generosity.

“He was indeed a simple and humane man, who practised politics with an open mind. Many testified that his resources were available to all and his home was there for anyone to come for help.”

Makinde, who declared that the state government would immortalise the late former governor, said a committee headed by his Chief of Staff, Hon. Segun Ogunwuyi, has been put in place to work on how best to honour the late Chief Alao-Akala.

He said, “As for the children who came with a request, I know how you feel and I will champion the cause to redeem whatever it is the late governor Alao-Akala has promised them.

“Finally, I have been going around determining how we can honour our great man from Oyo State. We have set up a committee headed by the Chief of Staff. If you also have any advice in this regard, let us know and, within the shortest period of time, the government of Oyo State will ensure that he is adequately honoured.

“On that note, I want to say farewell to a great man, my brother, my mentor and a great son of Ogbomosoland.”