Electoral Act: Buhari Doesn’t Like Himself, He’s Under A Curse – Aisha Yesufu 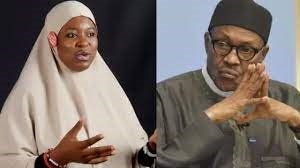 Aisha believes that the Electoral Act presented the President a huge opportunity to, at least, leave a lasting legacy before leaving office in less than sixteen months.

Many Nigerians are amazed that the President, despite giving assurance that he would sign the bill into law once the direct primary clause is expunged from it, is still withholding his assent even after the National Assembly has complied with his directive.

There are unconfirmed claims that some governors and top leaders of the ruling party are mounting pressure on the President not to sign the Bill for now.

There are also concerns that the delay in granting his assent to the Electoral Bill, 2022, may create legal uncertainties that will threaten the integrity of the off-cycle elections in Ekiti, Osun, including the 2023 general election, which is only 366 days away.

And Aisha Yesufu, one of the leading Bring Back Our Girls campaigners, believes that “Buhari doesn’t even like himself!” She tweeted.

“Otherwise he would be the one championing and doing everything possible to ensure that the electoral bill is passed!

“How can someone spend 8 years with zero positive legacy? The people that placed a curse on him did him bad!” She lamented.

DAILY POST gathered that no fewer than 26 Civil Society Organisations are currently mobilising for a protest.

The move is intended to mount further pressure on the presidency to do the needful and sign the amended bill into law.

See also  Osinbajo Opens Up On Having Issues With Buhari