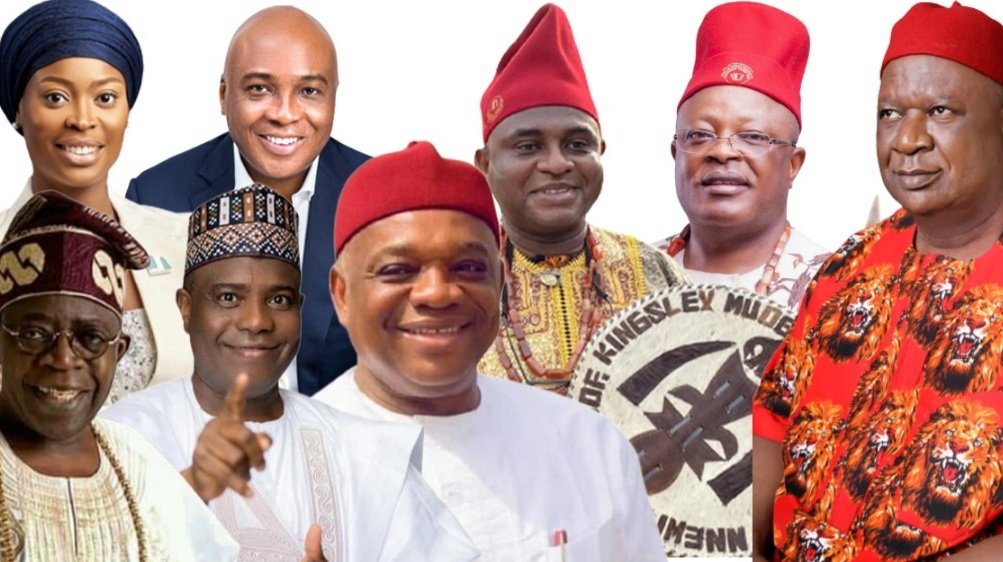 The South-East region is leading the 2023 race for who becomes Nigeria’s next President in terms of number of aspirants, but ex-Lagos Governor Bola Tinubu is the most mentioned home and abroad.

The political strategist from South-West has arguably the widest support across local councils, states and regions of the federation.

Regarded as the most formidable aspirant, the ‘Jagaban of Borgu’, insiders told DAILY POST, is ready to battle “anybody” for the nation’s topmost office.

It would be no surprise if Tinubu made such boast. His influence and alliance with other forces contributed to the dethronement of a government that was in power for 16 years.

President Muhammadu Buhari will leave on May 29, 2023, after completing two four-year terms. Nigerians have been debating the failures and successes of his administration.

Ahead of the general elections, the camp of the Lagos strongman have their eyes set on one goal: Ensuring the ‘Lion of Bourdillon’ is elected to lead the most populous black country in the world.

In January, his loyalists debuted the Asiwaju Bola Ahmed Tinubu (ABAT) Movement, the main support group. The other is the South West Agenda for Asiwaju (SWAGA).

With the presidential poll scheduled to hold in February next year, a number of prominent individuals have signified interest to fly their party’s flag.

Like in 2015, the candidates of the All Progressives Congress (APC) and the People’s Democratic Party (PDP) are expected to be the main contenders.

South-East: Dave Umahi: The Governor of Ebonyi State, 58, defected to the APC from the PDP in 2021. He was the State Party Chairman from 2009 to 2011. The former Chairman, Federal Medical Centre, Asaba, was deputy former Governor Martin Elechi.

Anyim Pius Anyim: The 60-year-old PDP chieftain was elected Senator for Ebonyi South District in 1999. He was Senate President from 2000 to 2003 and later served as Secretary to the Government of the Federation under ex-President Goodluck Jonathan.

Orji Uzor Kalu: The businessman was the Governor of Abia State from 1999 to 2007. The APC member is currently the Senator representing Abia North District and Chief Whip of the upper chamber. He is 61 years old.

South-South: Although no popular individual has announced intention to run, there are speculations that Rivers Governor, Nyesom Wike (PDP) and his predecessor, Rotimi Amaechi (PDP) are eyeing the presidency.

Wike, 58, is the most vocal opposition governor in Nigeria. He was Chairman of Obio Akpor Local Government Area from 1999 to 2007; Chief of Staff, Rivers Government House; Minister of State for Education during the Jonathan administration.

Amaechi is the current Minister of Transportation. He was Rivers Governor from 2007 to 2015. While in office, he served as Nigeria Governors Forum (NGF) Chairman. The 56-year-old was Rivers House of Assembly Speaker from 1999 to 2007.

South-West: Bola Tinubu: The APC leader admitted that the presidency was his ‘lifelong ambition’. He co-founded the party alongside Congress for Progressive Change (CPC), All Nigeria Peoples Party (ANPP) and an All Progressives Grand Alliance (APGA) faction. The Third Republic Senator is 69.

Khadijah Okunnu-Lamidi: Yet to announce the platform she’ll run under, the youth development advocate announced her preparedness to contest early January. The entrepreneur, 38, is the daughter of Femi Okunnu (SAN), a former Federal Commissioner of Works and Housing.

Yemi Osinbajo: Nigeria’s Vice President, 64, has refuted speculations that he would soon throw his hat into the ring but supporters are forging ahead. It remains to be seen if the Senior Advocate of Nigeria (SAN) will go against Tinubu, who nominated him as Buhari’s vice.

North-Central: Bukola Saraki: The ex-Governor of Kwara State (two terms), was Senate President in the 8th National Assemby. The former APC stalwart competed for the PDP ticket won by Atiku in 2019. The Wazirin Ilorin, was later appointed Director-General of party’ campaign. He is 59.

North-East: Atiku Abubakar: Though yet to officially announce bid, he wants to be President. The Wazirin Adamawa, 75, vied for tickets in 1993, 2011, and stood as a candidate in 2007 (Action Congress) and 2015 (PDP). He retired from the Customs in 1989 then entered business and politics.

North-West: Aminu Tambuwal: Re-elected on the PDP platform in 2015, the Governor of Sokoto State, 56, was House of Representatives Speaker from 2011 to 2015. He was first elected in 2003 to represent Kebbe/Tambuwal federal constituency.

The Independent National Electoral Commission (INEC) said it would not release the 2023 general election timetable until the Electoral Act Amendment Bill is signed into law.

On condition of anonymity, APC and PDP members who spoke to DAILY POST said they expect the picture to get clearer in the coming weeks, insisting that no decision on zoning yet.

The APC national convention will be held in Abuja on Saturday February 26. Negotiations and horse trading are at an advanced level.

There are claims that the national chairmanship and national secretary positions have been zoned to the North-Central and South-East respectively.