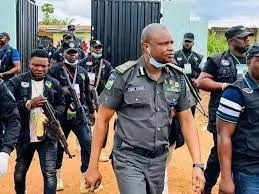 Extradition to provide him opportunity to clear himself —Source

NDLEA files 8-count charge against him, 6 others

Few days after the Federal Government approved the request by the United States for suspended Commander of the Police Intelligence Response Team, DCP Abba Kyari, to be extradited over the $1.1million wire fraud allegedly perpetrated by Abass Ramon, aka Hushpuppi and four others, Vanguard gathered, yesterday,  that there may be discreet moves by both the Police Service Commission, PSC, and and other Police authorities in Abuja to accelerate the processes involved in the outright dismissal of  Kyari from the force.

It was gathered that Police authorities formally queried Abba Kyari and his team on Sunday. He was given 48 hours to explain his involvement in the drug case.It was further gathered that the Federal Government may have approved the extradition of Kyari to provide him an opportunity to clear himself of charges against him in the US.

This came as the National Drug Law Enforcement Agency, NDLEA,  slammed an eight-count charge against Kyari, before a Federal High Court sitting in Abuja, following his alleged involvement in drug trafficking.

Sources who confided in Vanguard, last night, said getting Kyari outrightly dismissed from the force was geared towards preventing the shame that might accompany his trial by NDLEA, following his alleged involvement in deal after the on-going investigations.

‘Why there’s need to dismiss Kyari, others’

Vanguard learned that the moves became necessary based on reports that the Federal Government has approved the request by the United States for Kyari’s extradition after a grand jury, last April 29, filed an indictment against him, with the approval of the US District Court for the Central District of California.

He was accused of conspiring with a United Arab Emirate, UAE – based Nigerian, Ramon Abbas, aka Hushpuppi, to commit the crime.

Another source who spoke to Vanguard on condition of anonymity, said: “If you recall, the report of the DIG Joseph Egbunike Special Investigation earlier submitted by IGP Usman Alkali Baba was returned and Force Headquarters asked to carry out another investigation on the Hushpuppi allegation.

“They are yet to return the new investigation report to us. But whatever be the case, the Attorney-General of the Federation and Minister of Justice may have considered it expedient to send him to first clear himself of the allegations against him in the US.

“If he’s exonerated, then it would be easy to determine the case in Nigeria.”

The extradition proceeding initiated by the AGF against Kyari is contained in FHC/ABJ/CS/249/2022, brought under the Extradition Act.

Equally cited as defendants in the charge filed on February 28, 2022, were two alleged drug traffickers arrested at the Akanu Ibiam International Airport in Enugu, Chibunna Umeibe and Emeka Ezenwanne.

NDLEA, in the charge it filed through a team of lawyers led by its Director, Prosecution and Legal Services, Mr. Joseph Sunday, accused Kyari and the four other members of his IRT, of conspiracy, obstruction and dealing in cocaine worth 17.55 kilograms.

It alleged that Kyari and his men, who are currently in its custody, unlawfully tampered with 21.25kg worth of cocaine seized from the two apprehended drug traffickers, Umeibe and Ezenwanne.

The police officers were said to have committed the offence between January 19 and 25, 2022, at the office of Inspector-General of Police (IGP) IRT, Abuja, in connivance with one ASP John Umoru (now at large), contrary to Section 14(b) of the NDLEA Act, CAP N30 Laws of the Federation of Nigeria 2004.

Kyari was said to have attempted to bribe a senior officer of the NDLEA with $61,400 at a restaurant in Abuja to prevent the testing of part of the cocaine seized from the two arrested drug pushers.

On the other hand, the agency alleged that the duo of Umeibe and Ezenwanne, conspired with one IK that is currently at large, to import 21.35kg of cocaine into the country without lawful authority and knowingly possessed same, and thereby committed an offence contrary to and punishable under section 11(d) of the NDLEA Act, CAP N30 Laws of the Federation of Nigeria 2004.

The charges against Kyari, others

Some of the charges, read: “That you, Kyari, Ubua, James, Agirigba and Nuhu, all male, adult on or about January 19 to 25, 2022, at Abuja, within the jurisdiction of this court, dealt in 17.55kilogrammes of cocaine without lawful authority and thereby committed an offence contrary to and punishable under section 11(c) of the National Drug Law Enforcement Agency Act, CAP N30 Laws of the Federation of Nigeria 2004.

“That you, Kyari, Ubua, James, Agirigba and Nuhu, all male, adult on or about January 19 to 25, 2022, within the office of the Inspector-General of (IGP) Intelligence Response Team (IRT), Abuja, within the jurisdiction of this court conspired amongst yourselves and with ASP Umoru (now at large) to unlawfully tamper with 21.35 kilogramames of cocaine seized from Chibunna Umeibe and Emeka Ezenwannne in the custody of the Inspector-General of Police (IGP) Intelligence Response Team (IRT), by removing and disposing 17.55 kilogrammes of the cocaine and by substituting same with some other substance and thereby committed an offence contrary to and punishable under section 14(b) of the National Drug Law Enforcement Agency ACT CAP N30 Laws of the Federation 2004.

“That you  Kyari, on or about January 25,  2022, at a restaurant on Port Harcourt Crescent, Area 11, Garki Abuja, within the jurisdiction of the court, attempted to obstruct the agency and its authorised officers in the exercise of their duties by offering the sum of $61,400 to a senior officer of the agency as inducement to prevent the testing of the 17.55kilogrammes of substance used to replace the cocaine seized from Chibunna Umeibe and Emeka Ezenwanne and thereby committed an offence contrary to section 23 and punishable under section 49 of the National Drug Law Enforcement Agency Act Cap N30 Laws of the Federation of Nigeria 2004.”

Recall that the AGF had on Wednesday, okayed request for Kyari to be extradited to the United States of America, USA, to face trial over his alleged involvement with an internet fraudster, Ramon Abbas, popularly known as Hushpuppi.

The AGF, in an affidavit filed in support of the extradition application, said he was satisfied that the offence in respect of which Kyari’s surrender was sought, is not political or trivial.

He said he was also satisfied that the request for Kyari to be surrendered, was not made to persecute or punish him on account of his race, religion, nationality or political opinions, but in good faith and the interest of justice.

According to him, Kyari, “if surrendered, will not be prejudiced at his trial and will not be punished, detained or restricted in his personal liberty, by reason of his race, nationality or political opinions,” adding that having regard to all the circumstances in which the alleged offence was committed, it would not be unjust or oppressive, or severe a punishment, to surrender him.

More so, Malami, noted that there was no criminal proceeding pending against Kyari in Nigeria, bordering on the same offence for which he is wanted in the USA.