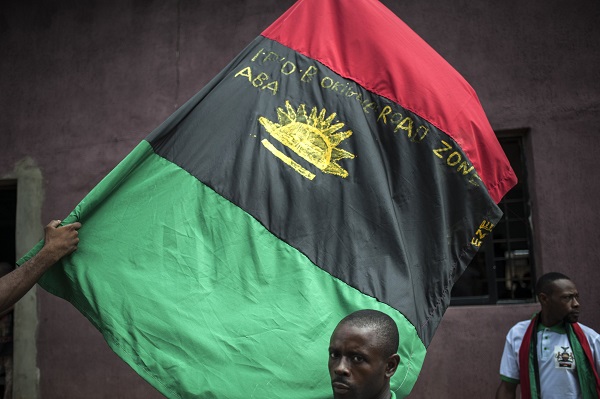 The global movement and family of the Indigenous People of Biafra (IPOB) under the command and leadership of our great leader Mazi Nnamdi KANU wishes to state that nobody has the monopoly of attack. We realise that some unscrupulous politicians and elements are recruiting cultists and criminals to attack our innocent citizens in the name of enforcing non-existent Monday sit-at-home in Biafraland especially the ones in Enugu State and other states in Biafraland.

Currently these criminals are mobilising to attack innocent citizens in the name of enforcing non-existent Monday sit-at-home order which IPOB had suspended long time ago.

Those killing innocent people in the name of enforcing sit-at-home order on Mondays are not IPOB members. IPOB cannot be part of destruction of the same people we are labouring the emancipate. We don’t waste lives, we protect lives. Evil politicians in Biafraland are the ones creating tension because their selfish political interest.

Enugu State is the capital and headquarters of Igbo land and need to be peacefu and conducive for living. Enugu has been a peaceful home for all Ndigbo as well as strangers and will continue to be so. The intention of the criminals behind this barbarity  is to implicate ESN and IPOB members who are only championing the restoration of Biafra nation. Their mission is to demonise Biafra agitators and possibly truncate the agitation but they came too late because the world is already aware that we are a non-violent movement.

We aware that some unscrupulous elements and groups sponsored criminals in Abia State particularly in Aba to continue pasting false information that Monday sit-at-home order still exist while they knew that IPOB who initiated it has suspended it long time ago. For record purposes those involved in this barbarity against our people on Mondays should stop or be ready for the consequences.

We are warning masterminds of this atrocities to stop or brace up for tough times because IPOB is ready to confront them. They must allow people to do their businesses without molestations on Mondays because Mondays are one of the days God Almighty Chukwu Okike Abiama ordained for living and we must achieve that goal without fear. There is no more sit-at-homes in Biafra land except on the days our leader, Mazi Nnamdi Kanu is to make court appearance, and such days will be duly publicised. Any other thing to the contrary has nothing to do with IPOB, and must be disregarded.