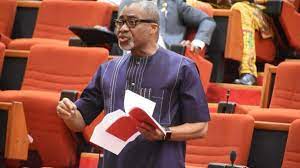 Abia State Government has taken a swipe at Senate Minority Leader, Enyinnaya Abaribe for attacking the position of the Peoples Democratic Party (PDP), in the State on zoning.

Abaribe, who is from Abia South, had, in a statement on Sunday, said the zoning of the governorship position to Abia Central and Abia North by the party was targeted at him, and that no person or body could exclude him from contesting for the position.

However, in a statement, Abia State Commissioner for Information and Strategy, Eze Chikamnayo, described the comments by Abaribe as unguarded and borne out of self interest, which according to him was a calculated attempt to destabilise the PDP in the state.

The statement read in part, “The recent unnecessary diatribe by His Excellency, Distinguished Senator Enyinnaya Abaribe who is currently representing the good people of Abia South in the Nigerian Senate, against the leadership of the Peoples Democratic Party in Abia State, is very unfortunate and totally unbecoming.

“First, the party has spoken and it remains binding on all law abiding members of the PDP in Abia State. Therefore, any personal attack either overtly or covertly on the Party and or the person of the leader of the Party, His Excellency, Dr Okezie Victor Ikpeazu is a wasteful exercise unexpected of a senior official of Senator Abaribe’s standing.

“The Peoples Democratic Party, Abia State is a democratic Institution whose decisions at all times must be based on the ideas, opinions and aggregate interests of members and stakeholders at all levels.

“In the instant case, Abia PDP decided to zone it’s Governorship ticket to Abia Central and Abia North based on the feedbacks they got from the recently concluded tour of Local Governments in the entire State wherein leaders, stakeholders and the entire membership freely proclaimed their preferences and made submissions as it affects the 2023 Governorship ticket. They rightly observed that only Local Governments from Abia North and Abia Central indicated interest to fly the flag of the Party for the upcoming Guber elections during the fact finding tour.

“Instead of Senator Abaribe to embarrass himself by embarking on this fruitless adventure of confronting the masses of PDP in Abia State, it is expected that he would go back to his LGA and initiate consultations in order to help them realise their lofty objectives of supporting him, Senator Abaribe, for a higher office such as the Presidency.

“For one person who has been Deputy Governor, and four time Senator it will naturally be a thing of joy for him to answer the clarion call of his people. It would be unthinkable to believe that any right thinking Abia Patriot will find nothing wrong in locating the Guber ticket in the same LGA as the incumbent given the prevailing sensibility of the generality of Abians at this point in our history”.

The argument that seems to be gaining a lot of currency in PDP is that its last presidential candidate came from the South-South in former president Goodluck Jonathan. Therefore, those bandying the argument say, PDP should look towards the North for 2023 elections.

There are those who counter-argue that irrespective of the argument above, with Buhari completing two terms from the North, it is morally incumbent on PDP to search for a southerner.

But one thing appears clear in all the scheming, deft maneuvering and calculation, Nigerians may be faced with a reverse of the 2015 situation where APC picked a Buhari from the North and PDP stuck to a Southerner. But will the outcome be the same or will it be different? Is Atiku going to be a perennial candidate or will he truly achieve his claim of being the unifier Nigeria and Nigerians need to undertake the process of healing the land? Time as well as the action and inaction of the parties will tell.