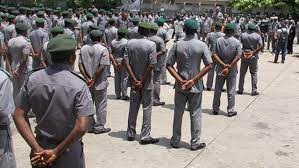 Nigeria Customs Service Board (NCSB) has approved the promotion of 3,466 general duty and support staff officers.

The spokesman said the board took the decision on March 29 during its 54th regular meeting.

The meeting was presided over by the Minister of Finance and NCSB Chairman, Zainab Ahmed.

Ahmed commended the Customs for the achievements in trade facilitation and revenue generation in 2021.

The minister charged the elevated officers to redouble their efforts in order to hit targets set for 2022.