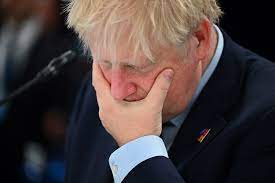 British Prime Minister Boris Johnson has finally resigned as leader of the Conservative Party under heavy pressure from lawmakers in his own party. His resignation caps a remarkable political career filled with highs, lows and almost too many scandals to count.

He said he will stay in office until the Conservatives choose a new party leader, who will then take over as prime minister.

“Of course, it is painful not to be able to see through so many ideas and projects,” Johnson said in front of the door of No. 10 Downing St. in London, as loud crowds could be heard nearby. “But as we have seen at Westminster, the herd instinct is powerful and when the herd moves, it moves.”

This comes after dozens of officials, aides and members of his Cabinet quit his government, saying they could no longer serve under his leadership. Several former Cabinet ministers told him he should resign.

An announcement will come next week about the timetable for choosing the new prime minister, Johnson said.