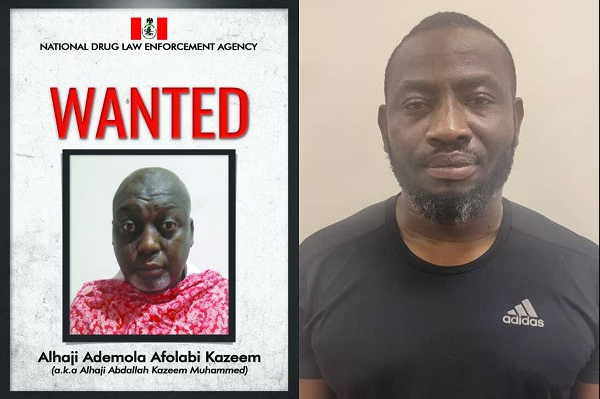 A wanted poster had been issued for an accused drug lord and kingpin who was wanted for organizing the transportation of big containers of illegal goods thought to contain cocaine.

The NDLEA charged him with offenses related to the trafficking and exportation of illegal substances as well as money laundering.

Femi Babafemi, Director, Media and Advocacy, NDLEA, Headquarters, Abuja, said in a statement on Tuesday that the suspect’s failure to honor invitations from the agency and an order given to the agency by a Federal High Court in Lagos on Monday, October 17, 2022, were the reasons for the decision to declare him wanted.

“In their recent attempt to export cocaine to Dubai, UAE, and other locations outside of Nigeria, some traffickers were caught, and the anti-narcotics agency was able to identify them as the sponsor of those traffickers.

“Alhaji Ademola Kazeem, who is also the Chairman of Adekaz Global Integrated Services, went into hiding shortly after one of his mules, Bolujoko Muyiwa Babalola, a Lagos BRT driver, was apprehended on June 27 at the Murtala Muhammed International Airport, MMIA, Ikeja.

Following his refusal to accept invitations, the Agency petitioned the Federal High Court in Lagos with three requests, all of which were granted: to attach and seal his identified properties in Lagos and Ibadan; to declare him wanted; and to block his bank account, which had a cash balance of N217,000,000.00.

As a result, on October 26, 2022, NDLEA agents sealed six of the identified properties on Lagos Island. The sentence is written.

Additionally, according to Babafemi, the agency detained Udemezue Obunike William on Friday, October 28, as he arrived from Brazil at the Nnamdi Azikiwe International Airport in Abuja.

He said that the Nigeria Immigration Service had assisted in the suspect’s arrest, which came after the previous capture of a number of drug couriers with Udemezue as their sponsor.

Messrs. Adolphus Anayochukwu Okeke and Anayo Michael Nnanna are two mules that are among the accused, according to the NDLEA Spokesman.

Okeke Adolphus Anayochukwu, a 52-year-old father of four who claimed to be a businessman, was detained by NDLEA agents at the Abuja airport on March 15 after arriving on a Qatar Airways flight from Sao Paulo, Brazil, via Doha, Qatar, to Abuja. He was carrying 20.75 kilograms of black liquid cocaine.

“The liquid was found when his luggage was searched. It was packed with six smaller bags that each contained 32 mascaras and tested positive for cocaine.

On the other hand, Nnanna Anayo Michael, a Brazilian returning passenger, was detained at the Port Harcourt International Airport (PHIA) on Tuesday, March 29, during the inward passenger screening for Qatar Airline Flight QR1433 from Sao Paulo, Brazil via Doha to Port Harcourt.

“Nnanna was apprehended with 73 sachets of cocaine totaling 8.15 kilograms, making it the biggest cocaine bust at the airport since it started handling international flights years ago.

“Further investigations into the two traffickers showed that Udemezue Obunike William was the cocaine cartel’s drug lord. He was therefore placed on a watch list and taken into custody following his arrival from Brazil on Friday, October 28. The statement provided more details.

In response to the most recent event, Brig. Gen. Mohamed Buba Marwa (Retd), Chairman/Chief Executive of NDLEA, praised the agency’s officers and employees who participated in the thorough investigation that resulted in the identification of the two barons.

He declared that the days of drug lords hiding behind traffickers and remaining anonymous were over and warned that if they didn’t give up their involvement in crime, the new NDLEA will continue to expose them one by one. He declared.