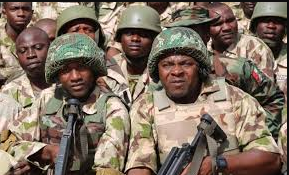 Exclusively obtained video showed the three gunmen’s bodies lying on the ground covered in trinkets from the area.

An eyewitness said that the disorganized gunmen were eliminated in a gunfight with the Nigerian soldiers.

Anambra state, meantime, has recently developed into a refuge for criminal groups posing as agitators. Leaders in business and politics have been brutally murdered.

Ifeanyi Ubah, a senator for the Anambra South senatorial district, was the target of the gunmen’s most recent attack, which also claimed the lives of security personnel in his convoy and Ubah’s aides.

But Governor Chukwuma Soludo, who has declared war on the robbers, has sworn that his government will take every reasonable step to root out the bad guys who are causing insecurity in the state.