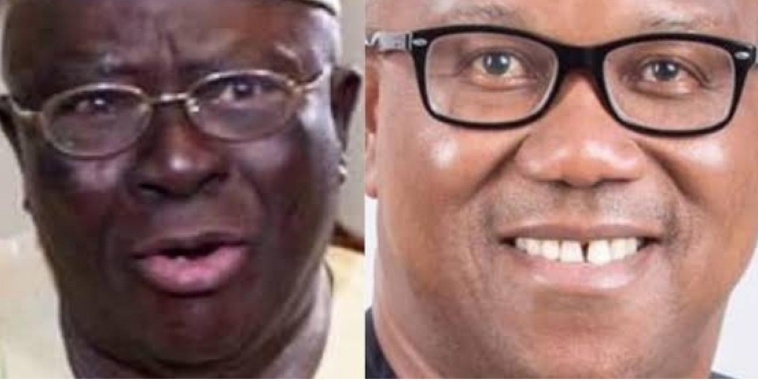 He expressed his determination to work towards ensuring that Obi becomes Nigeria’s next president in 2023.

Pa Ayo Adebanjo, the acting leader of the pan-Yoruba socio-cultural organisation, Afenifere, has reaffirmed his support for Peter Obi, the presidential candidate of the Labour Party amid the crisis and leadership tussle in his organisation.

He expressed his determination to work towards ensuring that Obi becomes Nigeria’s next president in 2023.

There has been controversy within Afenifere over the organisation’s endorsement of Obi and subsequently, the presidential candidate of the ruling All Progressives Congress (APC), Bola Tinubu, who is of Yoruba extraction.

While the acting leader of Afenifere, Adebanjo had openly endorsed Obi [former governor of Anambra State in the Southeast], citing equity and fairness as the reason, the former leader of the organisation, Pa Reuben Fasoranti alongside some other top members of the organisation on Sunday in Akure, Ondo State capital endorsed Tinubu.

Speaking at the official public presentation of the book titled, “Challenges of Good Governance and Leadership in Nigeria: The Peter Obi Factor,” by the Alaigbo Development Foundation (ADF) on Thursday, Pa Adebanjo reiterated that come what may, he supports any course that will make Obi the next president of Nigeria.

Pa Adebanjo went further to charge Nigerians, especially the youths to brace for the struggle to make sure that Obi succeeds President Muhammadu Buhari in 2023.

He, however, cautioned that making Obi the next president in 2023 will not be a rosy journey as those who are currently in power are not ready to leave, Sun reports.

“I am here to support any cause that will make Obi the next president of Nigeria. We want to change the system that celebrates and retains corruption. Young people must make themselves available on Election Day. They must mark every polling station/booth with dependable obedient followers; show them that you mean business,” he said.

According to him, Nigerians, particularly the youths who are struggling to make Obi the next president should know that they are fighting a battle where the oppressors would do everything possible to keep the position in order to continue oppressing them and crushing their future.

Adebanjo, therefore, charged Obi’s supporters to brace themselves and ensure that they put all their support into action. He urged them to embark on massive reorientation of their supporters to avoid being enticed by the politicians of the other parties who are determined to buy voters with their money.

He said, “You must show them that their money is useless. Prepare your minds not to be bought with their money. Make their money useless by your positive action. Don’t let them continue to say that you don’t have structures. You will sweep them out with their brooms. Ensure that all eligible voters go to the poll on Election Day to vote and protect their votes.”

Adebanjo described himself as an embittered old man, who has found in Obi, a young man that would cool him down for a better tomorrow. Thus, he pointed out that Nigerian youths in particular are not voting for Obi to be president of Nigeria, rather they are voting for Obi to change their lives and their future.

See also  What Pastor Adeboye said will happen in 2023