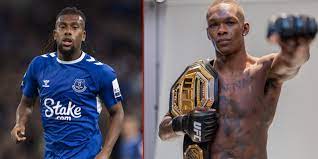 In kickboxing, “The Last Stylebender” lost twice against Pereira, who is known for knocking him out so severely that he need an oxygen mask in 2017.

Five years later, Adesanya has amassed an astounding 20 victories during his 21-fight professional career, making him the undisputed 185-pound champion and one of the most well-known fighters in MMA.

The middleweight title chance is already his after Pereira, who just officially retired from kickboxing in 2020, improved his record to 6-1 with a first-round knockout victory over Sean Strickland at UFC 276.

Adesanya received a wonderful gift from UFC flyweight challenger Molly McCann, a die-hard Everton supporter, before of the most anticipated fight of his life.

The MMA fighter is shown giving Adesanya an autographed Everton shirt and explaining that it was signed by his fellow Nigerian Iwobi in a video that she shared on her Instagram page.

I’ve got you, Alex Iwobi, McCann said. He’s a member of your Nigerian soccer team, therefore I asked him to sign that for you. Just a brother from where I come from supporting you, I thought.

Before parting ways and continuing to get ready to put on a performance at the most recent pay-per-view event of the MMA leader, the two UFC stars shared an embrace.

On Thursday, Iwobi posted a message to the Nigerian-New Zealander and McCann on his official Instagram story with the description, “All love! Good luck with your battles. @stylebender @meatbolly