ASUU accuses Ngige of authorizing half salary, says he has lost the right to mediate 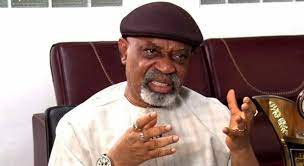 The President of the Academic Staff Union of Universities (ASUU), Professor Emmanuel Osodeke, has accused the Minister of Labour and Employment, Dr Chris Ngige, of allegedly authorizing the part-payment of salaries to members of the union.

The ASUU President also said Ngige lost his right as a conciliator in the dispute, following some of his actions in the course of the ASUU strike.

This was made known on Tuesday night by Osodeke while appearing on a Channels Television programme Politics Today.

Ngige is an interloper: During the interview, Osodeke described the Labour Minister as an interloper, noting that he has nothing to offer and no role to play. He said:

On salary payment: The ASUU president confirmed that the part payment was the first salary paid to union members since the strike commenced.

The backstory: ASUU members embarked on a strike on February 14, 2022, to press home their demands on the federal government.

Some of the lecturers’ demands include funding for the revitalisation of public universities, payment of earned academic allowances, and adoption of the University Transparency Accountability Solution (UTAS) as a preferred payment option instead of the Integrated Payroll and Personnel Information System (IPPIS). Other demands include payment of promotion arrears and the renegotiation of the 2009 ASUU-FGN Agreement.

The Minister of Labour and Employment, Chris Ngige, had dragged ASUU to the National Industrial Court, seeking an order of the court to restrain striking lecturers from further continuing with the strike.

Despite a ruling by the National Industrial Court on September 21, 2022, ordering them to return to work, the university lecturers remained adamant and subsequently filed an appeal against the court ruling.

After no breakthrough in negotiations between ASUU and the Federal Government, the Appeal Court ordered the striking lecturers to resume duty immediately.

ASUU in October suspended its long industrial action in line with an order by the National Industrial Court for the lecturers to return to work.

The Federal Government has since defended the pro-rata payment to ASUU members in October, saying they cannot be paid for work not done.