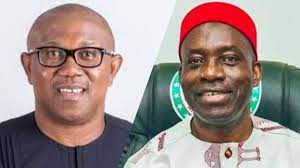 Some people who claim to be related to Prof. Chukwuma Soludo, the governor of Anambra State, have denounced his recent attack on Mr. Peter Obi, the Labour Party’s presidential candidate.

Voice memos from a WhatsApp group of Isuofia community residents in Lagos State that were made accessible to DAILY POST cataloged the grievances of the governor’s kinsmen over his recent verbal assault.

Isuofia Community in Anambra State’s Aguata Local Government Area is where Soludo is from.

A source from Isuofia who is also a member of the forum claimed that the WhatsApp group’s members all denounced the governor’s remarks in unison in the voice notes, which were anonymous.

Some of the voices expressed remorse at Soludo’s decision to refer to them as a headless mob in spite of their extensive campaigning and support for him during the most recent governorship race.

Was it not at Civic Center Isuofia where we first began rallying support for our brother to be elected governor? He still hasn’t been to thank us, and the only thing he’s offered in exchange is to call us a mob. He was chosen as governor by the same mob.

Another person claimed that because he is from Isuofia, he is frequently referred to as the governor’s brother in Lagos, where he currently resides.

“I used to be happy whenever people referred to me as the governor’s brother, but these days, many view me as a saboteur simply because of what our brother Soludo stated.

“One of my Yoruba neighbors once told me that Obi is a fine man, but the terrible part is that if they choose to support him, it will be his own brothers who pull him. Now that the man has been cleared, I feel so awful.

Another speaker added: “Our brother Soludo has corroborated what our oga’s father, with whom I resided when I was in the service of my master, used to say: ‘Passing six is not passing sense.’ He has demonstrated that wisdom is not always a result of education.

I’m in pain because of that assault. I haven’t been able to finish reading the governor’s essay up until now.

As a result of Governor Soludo’s attacks on Obi, there has been a wave of criticism. Many people found it heartbreaking that Obi had done nothing to provoke Soludo to launch such an attack.