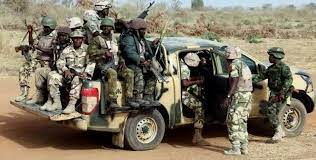 A Nigerian soldier went berserk, shot two unarmed humanitarian workers and a fellow soldier at a military base in Damboa Local Government Area of Borno State on Thursday.

“A soldier shot and killed a staff of one of the NGOs providing humanitarian support in the North East.

“Same soldier also killed another soldier and injured the co-pilot of one of the UN helicopters.

“Our troops on the ground immediately neutralized the errant personnel”.