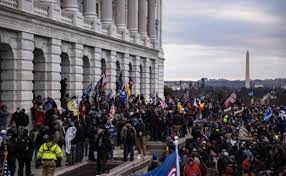 Washington: Stewart Rhodes, the founder of the far-right Oath Keepers militia, was found guilty of sedition on Tuesday for his participation in the attack by followers of the late president Donald Trump on the US Capitol on January 6, 2021.
Kelly Meggs, another Oath Keeper, was also found guilty of seditious conspiracy, carrying a sentence of up to 20 years in jail. Three other co-defendants were cleared of the same allegation.

The four other members of the organization, including 57-year-old Rhodes, an eyepatch-wearing former soldier and Yale Law School graduate, were charged with preparing an armed uprising to overturn the outcome of the Democrat Joe Biden’s victory in the 2020 presidential election.

The verdict brought an intense, nearly two-month-long trial to a close.

Numerous Trump backers have been detained for their participation in the assault on Congress, but they have been charged with far less serious offenses than Rhodes and the other four Oath Keepers.

Rhodes and the Oath Keepers “concocted a strategy for an armed revolt… conspiring to oppose by force the government of the United States,” the Justice Department claimed throughout the trial.

Videos of the assault by dozens of group members wearing combat gear were displayed by the prosecution.

According to the defendants, the case was a political trial conducted by the Biden administration against Trump supporters.

Before rendering a decision in the closely followed case, the 12-person jury pondered for over three full days.

The Department of Justice would have suffered if all five defendants had been found not guilty of the sedition charges, as it intends to bring similar charges against members of the Proud Boys, a different right-wing extremist group.

Prosecutors claimed throughout the trial that the Oath Keepers had stocked firearms at a hotel close to Washington and participated in the mob that stormed the Capitol in an effort to prevent Congress from certifying Biden’s victory.

According to the prosecution, Rhodes led his followers like a general on the battlefield rather than going into the building himself.

During the trial, Rhodes testified that his gang had no plans to attack the Capitol and that they had just come to Washington to serve as security for rallies.

We had no intention of going into the Capitol that day, according to Rhodes.

He acknowledged that some Oath Keepers entered the premises after going “off-mission,” to use military jargon.

He called Meggs, the leader of the sizable Florida Oath Keepers chapter, “an idiot” for leading his followers inside.