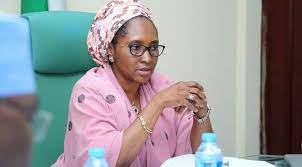 Minister of Finance, Mrs. Zainab Ahmed Wednesday cleared the air on the allegations of N206 billion inserted in the 2023 budget of the ministry of humanitarian affairs, disaster management, and social development.

In a special meeting with the House of Representatives committee on Appropriation which invited her alongside the Director General of the  Budget Office, Ben Akubeze, and the affected minister, Sadiya Umar Farouq, Ahmed said that there was a wrong coding of the projects.

She said the monetary provision was made for the social safety nets projects, stressing that it was an 800 dollars project that has been approved by the board of the world bank and the  federal executive council.

According to her, the loan was fully negotiated by the government of Nigeria with the full involvement of the ministry of humanitarian affairs.

She said: “The 2023 Budget proposal has been prepared with the utmost sincerity of purpose and in line with established regulations and procedures. Over the past week, there has been a lot of misinformation in the media regarding certain provisions in the 2023 budget totaling N423.8bn

“The expenditures questioned are mostly related to provisions for multilateral and bilateral loan-funded projects. It is instructive that all these projects are now the subject of controversy and were included in the budgets of the MDAs which were transmitted to the supervising Ministers for their review and feedback on 4 October 2022 before the presentation to both the FEC and NASS.

“Until these recent controversies, none of the concerned MDAs raised any issues on the projects with our ministry.

“These loans were previously not fully captured in the FGN budget; only the provisions for counterpart funds & debt service were included in the FGN budget. So, in 2021, we realized there was a gap that was underreporting and in 2021 and 2022 we started making this report.

“The sum of N206,242,395,000 was provided in the budget of the humanitarian affairs, disaster management and social development to provide for the social safety need project. This is an 800 dollars project that has been approved by the board of the world bank and approved by the federal executive council. This loan was fully negotiated by the government of Nigeria with the full involvement of the ministry of humanitarian affairs.

“This project was correctly described in the submission from IERD for the 2023 budget, but regrettably, a wrong code was inadvertently used in the process of inputting it, which resulted in it being captured as Purchase of Security Equipment in the GIFMIS Budget Preparation System (BPS), which has a limited dropdown range of project descriptions/codes

Ahmed also said that the same situation occured in the ministries of defence and power respectively, ruling out wrongful insertions.

“The Federal Ministry of Education (FME) – NUC. The amount in question here relates to the 2022 budget, during which it had a projected loan drawdown of $30m equivalent to N12,304,500,000 (@ exchange rate of N410.15/USD). The issue relating to this arose from the NASS committee’s review of FME’s 2022 budget implementation.

“The project is the “Second Africa Higher Education Centres of Excellence for Development Impact Project” and the financier is the World Bank. [ERGP30180290]

“For 2023, the amount captured for this project and the Sustainable Procurement, Environmental and Social Standard Enhancement Project is N26,134,200,000  (60 million US Dollars @345.57/$]; both are World Bank funded projects.

“The current issues would have been easily clarified between the respective MDAs and the FMFBNP had the affected agencies followed the established budget processes.

“The proposed 2023 budget for each ministry was circulated for review and feedback, then presented at the Federal Executive Council (FEC) before it was submitted to NASS by President Muhammadu Buhari.

“It is noteworthy that the total amount of multilateral/bilateral loan-funded projects included in the 2023 budget is N1,771,404,182,322, involving a total of 14 implementing ministries.

“So far, no issues have been raised in relation to the multilateral /bilateral loan-funded projects by the other ministries

“It is evident that there are internal coordination issues between the PIUs in some MDAs and the CEOs/Accounting officers of the implementing ministries. We will be taking necessary actions to ensure that this is addressed going forward

“Specifically, for multilateral/bilateral funded projects, the PIUs are domiciled in the designated implementing MDAs, and the lenders will not deal with any other agency, including FMBNP, on their procurements”.

Also testifying before the committee, the Permanent Secretary of the Ministry of humanitarian affairs who represented the minister said at no time did they go to the media to discuss the issue of budget padding.

He said: “I bring the apologies of the minister. She tried to reach you to express her inability to be present today. She’s unavoidably absent. That’s why she gave me permission to represent her. We did not go on air explaining anything about this issue of the budget. I was there present on the committee.

“It was not the ministry of humanitarian affairs. The minister was asked a question and when she noted the code, she said she did not understand and that she will get clarification the chairman obliged that more clarification will be brought and the matter was put to rest.

“One of the members in the summary insinuated that there is padding and what was what the press took. So, the minister of humanitarian never mentioned padding. She requested time to correct this mistake she observed and that is what the minister of finance has clarified. Two, we did not go to the media refuting or challenging rather we wrote a letter seeking clarification and that was given to us promptly.”

The chairman of the House Committee, Hon. Aliyu Betara in his remarks expressed displeasure with the ministry for not seeking clarification but running to the media with the issue, saying that the lawmakers were not happy.

He also lambasted the minister for not honoring their invitations, asking her to quit the job of she was tired of it.