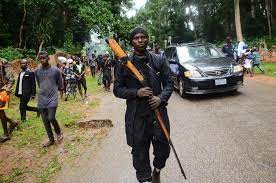 Nnewi Central Vigilante Group in Nnewi North Local Government Area of Anambra State has rescued a middle-aged woman, who was abducted by kidnappers in the state.

The woman, identified as Ogedimma Ndubisi was said to be abducted at Coscharis bus stop, along Ozubulu Road, Akamili – Umudim, Nnewi on Thursday, November 1.

The abduction was said to have occurred in the evening hours when she was waiting for a commercial vehicle to convey her home after work.

But, the woman was said to have regained freedom precisely a month after being kidnapped on Thursday.

She gained her freedom from the kidnapper’s den after the vigilante group’s intervention and successful operation.

“The kidnappers targeted the woman when she closed from work, and kidnapped her. She was waiting for a vehicle to convey her home.