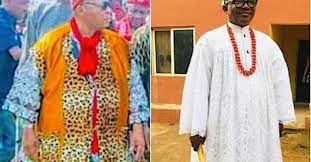 Chairman, Interim Management Committee of Njaba Local Government Area of Imo State, Emeka Iheanacho has indicted the Police over the bloody attack on the council headquarters, that took the lives of two traditional rulers and left many others injured.

In a report personally signed by the IMC Chairman and made available to Atlantic Reporters, the council boss accused the police of refusing to provide security for the meeting of traditional rulers on the said day, despite assurances of doing so.

Below is the full report, as issued by the Council Chairman:

1. Distribution of 20,000 exercise books to heads of primary and secondary schools in Njaba LGA

3. My monthly meeting with Njaba LGA council of traditional rulers

In order to ensure security of lives and property during the meeting, I called one ASP Nwankwo, who leads the Njaba LGA Police Operation Search and Flush Team on 18 October 2021 and requested the presence of his tea at the council headquarters the next day for the above programme. He agreed to come with his team. The police also came to the council headquarters on 19th October 2021 with his team as agreed. But shortly before the commencement of the programme, the leader of the police team, ASP Nwankwo came to my office and informed me that their commander instructed them to return to Owerri. I refused to allow them to go in order to avoid jeopardizing the security of lives and properties in the environment, but they insisted to go. They finally left and told me that they would be back before the next two hours. The HOD Works of the Council, Mr. Emeka Uneanya, and a vigilante security officer of the council, Mr. Ernest Okorochukwu were witnesses to the argument between me and the police team leader in my office. Our meetings and programme however commenced as we hoped on the return of the police team as they promised. But three hours after the commencement of the meeting, we did not see them. I then called the team leader to know why they have not come back, but he told me that their commander had not yet released them.