Biafra of the Mind 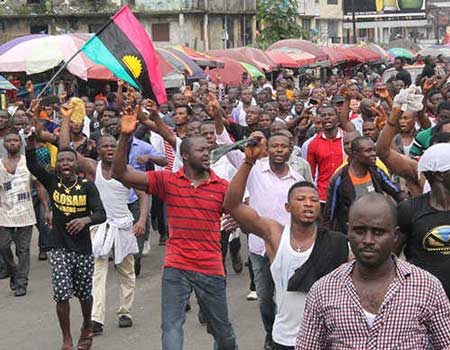 Nwanna, many years ago, the General, Dim Chukwuemeka Odumegwu-Ojukwu spoke about the “Biafra of the mind.” Only a few, I think, understood him. Well, they say, only the deep speak to the deep.

But let me attempt here to tease out Dim Ojukwu’s prescription: the greatest proof of Igbo survival and aspiration must be to model, wherever Onye-Igbo stands, the ethos of innovation, excellence, ingenuity, and ability that marked the Igbo endeavor in Biafra. We must also use Biafra as the stepping stone to a higher vision of the Igbo place in the world.

There is no single proof or evidence today that the Igbo of this generation are capable of transforming any nation to which they lay claim. I have looked; I have studied the Igbo situation, and I have listened to my Igbo kinsmen, and I think something is fundamentally wrong: the Igbo are trapped in a deadening hate, self-pity and nostalgia. It is the kind of nostalgia that is both defeatist and deadly because it continues to romanticize the past while the future speeds away.

The Igbo cannot wait until they achieve Biafra or a separate nation in order to build and secure Igbo land. Soon after the end of the war, Igbo survivors of the war, girded their loins and embarked on the work of restoration. With singular grit, they revived the economy of the East, and by 1979, just nine years after the end of the war, were ready to take on the rest of the nation again. We their children are a disgrace to the spirit of those men and women.

The Igbo are today a beggarly nation of impotent, lachrymal people now weeping about “marginalization” and waiting for Nigeria to collapse or let them go, so that they will go and make something of themselves. This is an over-indulged generation. The last of the Igbo are old and dying; the current Igbo are “inferior Igbo.” They are just waiting for Godot.

Now, you say, the only time the Igbo will work is if power remains in the South. I think this is too simple. Take a look around you, where are those Igbo men and women? Which Igbo today have the sagacity of Zik, or the courage of Okpara, Mbakwe, or Ojukwu, the capacity of Ojike or Okigbo, the fierce pride and stabilizing force of the old Igbo women, the organizational acumen of an RBK Okafor, the selfless pride of those Igbo of the last generation, who always rose to the occasion when the Igbo summoned them to great causes, including giving their widows mite without question, for as long as “they Igbo have said…”

Now, what I’m trying to say, people, before I lose you, is that the Igbo have left the land, and the land has left the Igbo. There is incoherence. And an Incoherent people cannot run an independent nation, simple.

Bring proof to me that the Igbo have turned Igbo land into an oasis of prosperity different from elsewhere in Nigeria, and I shall agree that the current Igbo know exactly what they are saying. There is no Igbo state with a budget that is not bigger than the budget of the Republic of Ghana. Indeed, put together, the budget of all the states in Igbo land is bigger than the national budget of ten West African states. What have we done with it in terms of rebuilding public services? Creating liveable cities? Developing new infrastructure? Developing the Igbo world.

The North or the West has never run down our schools.

They did not dismantle the Government Colleges at Umuahia, Owerri, Afikpo, and the Queens School at Enugu.

They did not destroy our hospitals or primary schools.

They did not stop us from building our cultural infrastructure – Community centers; recreational centers, or building up our libraries; or public parks, or city centers, or trunk B & C feeder roads.

They did not forbid the Igbo from creating strategic means of employing their greatest resource – their highly trained manpower- and using them to create a powerful regional economy that would continue to startle West Africa.

The North or West did not say we should not build an efficient trans-regional transport metro system, by jointly developing the old Oriental lines, that would create a network of contacts all over the East and ease the strategic movement of people, or take advantage and rebuild, and expand the Rail system that connects Port-Harcourt, Aba, Umuahia, Okigwe, Ovim, Afikpo, Enugu, to Eha-Amufu. Even if the rail system is a federal project, there has never been a consortium of the Igbo states and consortium of investors that have mounted pressure to force the Feds to hands off the Eastern Rail system, to be run as a regional Terminus. We have never made the argument.

When Mbakwe arrived government house Owerri in 1979, the three major cities in old Imo – Owerri, Aba, Umuahia still had houses operating “bucket latrines” and the cities still employed nightsoil men (ndi Oburu nsi) and ran waste landfills. The first statewide public safety and hygiene law passed under the Mbakwe administration gave every landlord and household in these cities 4 months and a tax rebate to change the infrastructure from the bucket system to the water system, failure of which the houses would be marked as public health hazard zones. This was fully accomplished in three months.

By 1982, there was a marked upsurge and population shift as more Igbo began to leave Lagos and other places to return to Owerri and invest and settle. Nobody told them to return, the conditions were simply made amenable. By 1984, Igbo business men, particularly in the North, were moving their money and opening accounts with the Imo state Progress Bank, and the capital was growing for both accessible credit and for capital borrowing for infrastructural development in the East.

I point this to simply suggest that there is nothing the Igbo wish to accomplish in Nigeria that anyone can stop, if the Igbo hold down their lines. But we’ve deceived ourselves for too long – we have now made Nigeria into the convenient excuse for our own failures and self-indulgence. Now, there is a man called Onwuka Kalu. He gave the first N100, 000 as donation towards the Imo state Airport Appeals Fund in Owerri in 1981/2. There is not a single plaque to honour this man’s gesture at that airport. It will not be the Federal government that will do it; it will be the initiative of those who put value to memory in Igbo land.

But in the Imo/Abia/Ebonyi/Anambra/Enugu divisions that now pervade the Igbo mind, no one will remember. This is no recipe for a people moving towards transformation. Let me now, tell this whole truth: onweghi onye ji Ndi Igbo, Ndi Igbo ji Onwe ha (no one is to blame for the Igbo predicament but Ndigbo). Those who wrestle with Ala, the Earth goddess, often forget that no one has ever lifted the earth. Ala-Igbo is the earth, Anaghi Apa ala Apa! (No one can lift the earth). Period.

The Igbo of this generation are wrestling with the earth left to them by their ancestors. And they are busy blaming everyone else for their condition. We who have done, “Ihe Nzere” should tell the truth, or may our tongues cleave to our gums.