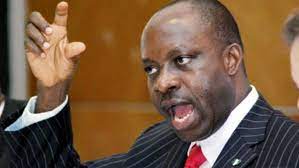 Soludo emerged with a total of 112,229, winning his closest rival and candidate of the Peoples Democratic Party-PDP, Valentine Ozigbo, who scored 53,807.

Declaring the final results of the election, Returning Officer and Vice Chancellor of the University of Calabar, Professor Florence Obi declared the APGA candidate elected, having scored the highest number of votes at the polls.

She said that Prof Soludo, having scored the highest number of votes cast and certified all the requirements “is hereby declared the winner and returned elected.”

She further said that she certified that the election was held in all the 21 local government areas of the state.

“I, Prof Florence Obi hereby certify that I am the returning officer of the Anambra state governorship election conducted on 6th and 9th of November 2021; that the election was held and Prof Charles Soludo, candidate of the All Progressives Grand Alliance, having fulfilled the requirements of the law and pulled the highest number of votes, is hereby declared winner of the 2021 Governorship election of Anambra State and returned elected,” she said.

Reacting to the results, former national chairman of APGA, Senator Victor Umeh urged those that lost in the election to accept and join the party to move the state forward.

He said that the Anambra people have spoken and must be respected.

Also speaking, a chieftain of All Progressive Congress APC chief Chinuzo. Obiako said that the party will sit down and decide on the next line of action.