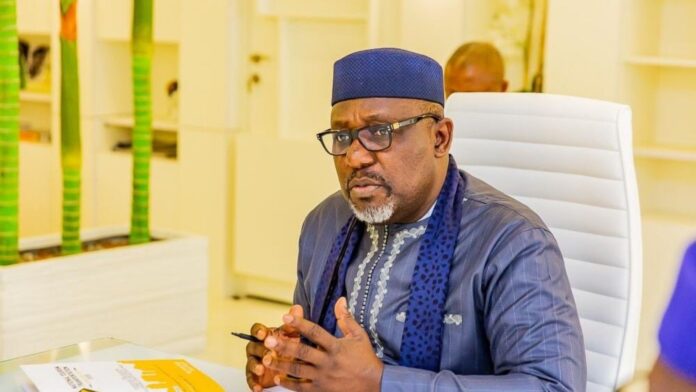 Yesterday, I read Linus Ozurumba of Nigerian Daily Horn Newspaper in the edition of Wednesday 2nd February 2022, who captured what perhaps gives credence to the incontrovertible punditry of Rochas Okorocha’s 2023 unavoidable retirement/ terminus in politics.

He wrote from Owerri and captured it all in the following quotation, to wit: “Until January 2020, Imo State was a grazing ground for greedy leadership, a festering sore for public asset stripping and misappropriation. One of the former Governors, Rochas Okorocha, was lawfully investigated by a Judicial Panel of Inquiry.

And the Panel‘s findings tilted from the bizarre to the abominable, even ridiculous. He was on a verge of setting a new world record in primitive, unabashed annexation of public funds and assets as family fortunes. He was on the verge of dethroning the late Mobutu Sese Seko whose despotic and corrupt regime in Congo ranked among the most corrupt in the world. …”

And I only this morning read IPOB’s scathing remarks signed by the group’s PRO, Comrade Emma Powerful, on the same Rochas Okorocha, to wit: “… Okorocha was one of the most unfortunate things that have happened to Imo State….His atrocities in Imo State are pursuing him and his families including his son-in-law, Uche Nwosu because he could not advise his father-in-law to allow people their ancestral lands and homes… Okorocha arrested our (IPOB) women in Imo State thinking he can (sic) break the spirit of IPOB followers.

The present administration (Gov Hope Uzodimma’s 3R Government) in the State collected (recovered) people’s lands he took from them by force and handed back to the owners. Since then, Okorocha hasn’t been himself. He (Okorocha) started sponsoring unknown gunmen and cannibalism in the entire region. But we will soon expose him”.

It does appear that the straying chicken is finally coming home to roost.

Beyond the razzmatazz of the flairs, pretensions, and media hypes of the 31st January 2022 Presidential declaration of the “partyless” Senator of Imo West Senatorial zone – Owelle Rochas Ethelbert Anayo Okorocha, 2023 is a terminus for the self-styled politician. Sen Rochas Okorocha is known for his unrepentant nepotistic style of leadership and of course, for his insatiable quest for material/land acquisitions.

Authoritative sources in the innermost Political kitchen of the erstwhile Governor of Imo State have it that there is a dilemma of prospects in the camp beyond 2023. The dilemma is one very highly guarded secret amongst the few inner caucus members of the Okorocha political niche. However, this highly guarded secret can obviously be seen reflecting in the inertia in the camp on the road towards the 2023 TERMINUS of the Rochas Okorocha political sojourn.

It is understandable that given the very highly circulated and credible information on the massive recoveries being made from Sen Rochas Okorocha by the incumbent 3R Government of Shared Prosperity in Imo State, the notoriety of the Presidential pretender is a well-known barrier to his continued sustenance as a politician.

It is also muted in many Northern and even Western States of Nigeria that the credibility of the Senator is highly questioned. Amongst Igbos, there is a widely held belief that the Senator is so criminally minded in his politics of impunity that he is accused of having defeated shame. Many are surprised by the audacity with which he faces his exposed conversion of Public assets.

His present dilemma to either remain with his Action Alliance or rejoin the Peoples Democratic Party or even seek an impossible special membership revalidation window with the ruling All Progressive Congress APC can be seen to have politically significant snares.

With the AA not being viable nationally, the PDP option ridden with deep suspicion from the State leadership level of the party and the looming National Conventions of the APC, the man’s most responsive political antennas appears jammed with contraindicated signals. This jam spells an end, though belated, of the Okorocha game.

Going by the complexities of the political situations around the outgoing Senator, many far-sighted political pundits predict a prompt terminus for the chequered political career of the Jos-born Imo politician. But there is still a foreclosed last-minute maneuver meant to reinvent fading fame badly battered by the man’s unearthly greed and self-dribbles. The only snag in his now-notorious pretentious humanitarian camouflage is that everyone appears to have known his old game and pretenses. The greatest fear is the possibility of being stripped of all political cover and power-induced immunities by the time his tenure as a Senator ends this fast approaching 2023.

There are a lot of judicial implications to the ending political life also of the erstwhile Governor. These are already beginning to play out.

It might be noted that there are fears within certain quarters in PDP loyal to Hon Emeka Ihedioha that the larger-than-normal political flair of the grossly discredited Rescue-Mission-Okpoko politician can not be trusted.

The moody looks on the face of Hon Uche Onyeagocha during the desperate moves by Ihedioha to co-opt and or inherit Okorocha’s political followership for a possible reversal on the gains of the State over the recoveries against Rochas is a point in serious review. The recent antecedent of Okorocha with the All Progressive Grand Alliance (APGA) with whose platform Sen Rochas Okorocha secured his governorship of Imo State in 2011 is so eminently a reference point.

That past stint is now a contender against the man. The way and manner he threw the party away and masterminded the impeachment of two Deputy Governors that served under him in his dual tenures continues to frighten the Imo PDP in general and in particular, the man to whom the Governorship ticket of the party is perennially betrothed. Besides, his baggage in the Somtochukwu’s cold-blooded murder over the court-restrained demolition of EkeUkwu Owerri will not allow any political ship to sail without capsizing.

It is projected that the Senator, more than his hyped Presidential aspirations, is afraid of his looming retirement from political office with effect from 2023.

As the curtain draws down for the man leaking up his past messes while in office as Governor, many Nigerian politicians are learning the lessons of tact, moral decency, and moderation in politics. The lessons are huge and the fading magic is ridiculously laden with a prospective danger following every politician associated with Owelle Rochas Okorocha. This is where I honestly fear for Prof Nnamdi Obiaraeri and Sam Onwuemeodo.

The flood of litigations expected to grace the painful retirement season for the outgoing Senator will apart from his perspective matters with State anti- Corruption actors including the EFCC and the ICPC, also involve individuals, families, communities, local governments, and even Imo State that suffered from his now deflated gambits of forceful conversion of lands and associated properties. The fact in the issue is that the Imo Government gazetted White Paper on lands will continually thoroughly make retirement for Okorocha a time for forced restitutions.

But if care is not taken, Owelle Rochas Okorocha’s uniform in either Kuje or Kirikiri prison may long have been sewn. That will be the needed national watershed to discourage graft, greed, and nepotism amongst politicians of the post-2023 dispensation.

Stanford Arinze Nwokedi is the Senior Special Assistant to the Governor of Imo State and writes from Owerri.